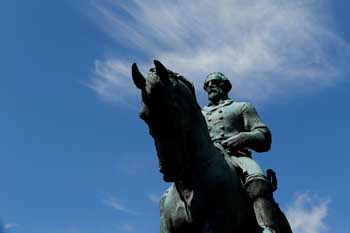 Cities around the world have recycled historically painful statues. There’s a lot we can learn from them.
• JULIA IOFFE
As Confederate statues come down across the American South, there is a question of what to do with them once they’ve fallen. Should these metal and stone colossuses be melted down and broken up? Discarded? Should the wishes of those who, like President Trump, see sentimental and historical value in the statues, be respected? And if so, how?

The events of the last week and a half have reminded us about just how powerful these statues can be, both as tangible metaphors of power, and as catalysts for debate over how we write our history. When we decide as a society that the record is incomplete or inaccurate, and that certain historical figures should not be accorded literal pedestals—what happens to the artifacts of the narrative we discard?
Here, the experience of other countries with painful pasts might offer some guidance in neutering the physical embodiments of the perpetrators of that pain, or turning them into warnings and lessons for others.
When the Soviet Union fell in 1991, so did many of its statues, often in giddy, nighttime topplings—most notably, the statue of Felix Dzerzhinsky, the founder of the ruthless Soviet secret police. These were often joyous, cathartic events, quick and tangible symbols of the end of a brutal and moribund regime, when everything else was changing far more slowly. In Moscow, the statues were then dragged to a grassy lot next to the brutalist Central House of Artists on an island in the middle of the Moscow River. For years, they lay there on the ground, a kind of graveyard of Lenins and Soviet crests and anonymous workers and peasants shorn of their pedestals. In recent years, the city of Moscow has turned them upright—and into an outdoor sculpture garden where the statues can be seen for the ghosts that they are. (I have walked past the garden many times, but found it hard to take interest in what were essentially tombstones with no graves beneath them: Unlike the long-overdue removal of Confederate statues, the removal of Soviet statues in Russia proved superficial and the celebration premature. The statues were yanked down, but the Soviet state didn’t really go anywhere; even the melody of the national anthem is the same.)
In 1997, Taiwan did a similar thing with the statues of nationalist dictator Chiang Kai-shek and his son, Chiang Jing-guo. Their likenesses were put into a green park on the bank of a lake, the Cihu Memorial Statues Park. Each statue has a description of where it originally stood. These parks deprive the statues of their context and their power; they may look like a brutal dictator, but here they are just stone.
There’s a reason statues can rouse such angry passions. They are designed to evoke emotion and memory in monumental terms. That’s the whole point. But they are not just symbols of what a society has decided is important. Often, they also serve as embodiments of the state, reminders of its presence even when one of its enforcers can’t be there. A statue can be an inanimate chunk of rock or metal in loco parentis. The Confederate statues, many of which went up well after the Civil War, were reminders of who was in charge, symbols not of an old master, but a new one: Jim Crow. Which is why statues can often become flashpoints of conflict, as they did in Eastern Ukraine in the wake of the Maidan revolution and Russian invasion of 2014. Ukrainians gleefully toppled Lenins all over their country, eager to shed their Soviet, Moscow-dominated past, and to move into the future. At the height of the Arab Spring, protestors in places like Syria defaced and brought down statues to the still-living dictators they couldn’t always topple.
It is also why many cities around the world have made statues out of the pain these governments have wrought. When the Berlin Wall, for decades a symbol of division, came down, its fragments became precious mementos of freedom. Now, part of the wall is in a museum; other fragments have been left standing and turned into a memorial to the pain and death the wall represented. A barely noticeable black seam runs through the streets of much of the rest of the city, a faint reminder of where the hated wall stood. Amsterdam has turned the attic where Anne Frank and her family hid from the Nazis into a museum, educating tourists about the darker chapters of this heady city’s history. Auschwitz still stands, a grim memorial to the millions killed there with mechanized efficiency during the Holocaust. In Russia, activists post plaques at the last addresses of the victims of Stalin’s mass repressions. In 2004, Buenos Aires turned the ESMA Navy Mechanics School into a museum. It was the country’s most notorious prison during the junta’s Dirty Wars; some 5,000 people were “disappeared” here. Turning the school into a museum was part of the country’s wider struggle to confront and evaluate the dark stain of the military dictatorship, including its reach into the present.
The statues should come down. The way they stand now is the way in which they were originally intended to: as stand-ins for an oppressive regime, one that is mostly gone. But President Trump is right—they shouldn’t simply be erased. Put them somewhere, on a patch of grass, on the ground and with no pedestal, where, at eye level, they can serve as reminders not just of what a state has done to its people, but of what it still can do if the people forget.