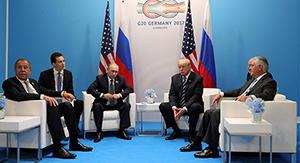 Dmitri Trenin
Summary:
The Russian president’s decision to cull 755 U.S. Embassy employees was not the act of a man ready to give up on relations with the United States.

It should be obvious that the looming U.S. sanctions against Russia will not, as Secretary of State Rex Tillerson optimistically suggested last week, propel Moscow to seek improvements in its relations with Washington. Just the opposite: The sanctions, which have not even yet been signed into law, have already prompted the Kremlin to end the one-sided truce with the United States that had held since the election of Donald Trump and to hit back at American interests. Last Friday, Russia announced that it was stripping the United States of two diplomatic properties and would demand cuts to U.S. Embassy staff within the country. On Sunday, it made clear that it wasn’t messing around: Out of about 1,200 Embassy employees, 755 – diplomats and staff members — would have to be gone by Sept. 1.
Trenin, director of the Carnegie Moscow Center, has been with the center since its inception. He also chairs the research council and the Foreign and Security Policy Program.

These are, to be sure, serious measures. And yet Vladimir Putin is not really behaving like a man who has entirely given up on a relationship with America. His moves this past weekend were deliberate, rather than spontaneous, acts of anger. Putin has made a point of targeting the U.S. government, rather than American business interests in Russia. He has specifically indicated that he is not considering more restrictions against U.S. interests, for now. He probably wants to see how Washington’s latest sanctions legislation will operate in practice before deciding on his next move.

The Russian president has never been shy about venting his anger at those whom he considers Russia’s enemies in the United States, as he did last week on a visit to Finland, where he called the sanctions bill “unacceptable” and said it was “destroying international relations and international law.”

However, he is also careful not to burn all bridges. What Putin sees in the United States is a country undergoing three monumental crises. The first is a cold war between Trump and his detractors that has all but paralyzed the U.S. government. The second is an even more fundamental conflict between the ever-richer elites and a wide section of the American people whose living standards have stagnated for decades. The former conflict may be resolved within two to four years, via impeachment or new elections, but the latter will take much longer to be sorted out. The third is a crisis in U.S. foreign policy: a conflict between those who want continued American global leadership and those who seek retrenchment. This conflict may take the longest of all to resolve itself — and until the United States decides what sort of country it wants to be on all these fronts, we can reasonably expect the Russian president to tread with caution.

The 2016 election and its aftermath have not only stunned observers but offered some important revelations about the United States. The country’s political establishment, for the last 120 years a model of self-assuredness and solidity, has begun to lose self-confidence. The elites’ sagging self-esteem is evident in their bewildered acceptance of the idea that U.S. democracy is vulnerable to outside meddling and ineradicable suspicion that the elected president and those loyal to him may have colluded with a foreign country. The establishment’s prevalent anxiety that Russian propaganda, in the form of the media outlets RT and Sputnik, little known as they are in the United States, could sway the American public’s attitudes betrays a lack of confidence in the U.S. electorate.

Trump’s election has also magnified the crisis in U.S. foreign policy that preceded him. The United States began turning inward in the aftermath of George W. Bush’s disastrous presidency. Barack Obama led the retrenchment operation; Trump has merely continued it in his typically disruptive manner. Of course, there is a difference: Whereas Obama tried to cover U.S. withdrawal with U.S.-inspired and supported international action, Trump the nationalist has dropped the camouflage.

For a former KGB officer like Putin, these are useful pieces of intelligence. A country in the throes of multiple crises, both insecure and confused, is inherently dangerous. The ongoing political warfare in the United States, has, in Putin’s view, resulted in “Russia” becoming a weapon in the hands of those who want to destroy Trump. Even when this particular domestic crisis is settled, Russia will remain toxic in the United States for a decade or more. An embattled U.S. president can always turn to real weapons to strike at opponents abroad to improve his prospects at home. Bill Clinton did it by bombing Iraq during his impeachment hearings — so why not Donald Trump? He has done it in Syria, where Russia is deeply engaged, and might do it again in North Korea, thus bringing real war to Russia’s far eastern doorstep. The Kremlin has to take all this into account while deciding on its U.S. policy.

Amid the present chaos, it makes sense for the countries viewed as challengers to the United States on the world stage to allow it to refocus on its domestic issues while quietly pursuing their own agendas and above all avoiding direct confrontation with the still overwhelmingly powerful global hegemon. This is precisely what China is doing. The same would be a sensible course for Russia, too; however, Moscow’s actions in Ukraine, and later in Syria, along with the hack of the Democratic National Committee last year, have resulted in a growing confrontation with the United States, making the quiet pursuit of its own affairs impossible for Russia. And so, under the circumstances, carefully targeted countersanctions, limited in scope, are something of a next best option.

Putin has publicly conceded that any real improvement in U.S.-Russian relations is safely blocked for the foreseeable future. Trump and Tillerson can have long and substantive discussions with Putin and Foreign Minister Sergei Lavrov, but delivering results is a different matter: A powerful coalition of the U.S. Congress, the Defense Department, the intelligence community, and the bulk of the mainstream media has embraced a strategy of piling pressure on Russia until it cracks. The sanctions that will soon become U.S. law are certainly not the last.

Putin acted carefully this weekend; he must continue to do so in the months to come. He understands the vast asymmetries between Russia and America. He knows that the arms race with the United States undermined the Soviet economy; a repeat of it would kill Russia’s. He likely realizes that self-imposed isolation, via sanctions on Western companies, would be much worse for Russia than any U.S.-driven attempt to isolate it from without. He should see that fanning xenophobia and anti-Americanism at home would hardly bring any benefits but instead would hurt relations with other countries, not just the United States, and retard Russia’s development still further. The Soviet Union tried to deal with the United States from a position of an equal, which it was not, and eventually quit the stage; the Russian Federation, starting from a position of weakness, has to be smarter. Putin, the judo fighter, certainly gets it.

To be smarter, Russia needs to continue to target its U.S. policies precisely, sending different messages to different stakeholders. It is one thing to retaliate against the U.S. government’s interests; it is another to go after American businesses in Russia. Russia needs to deal with the U.S. military but on the understanding that the only thing that can and must be achieved is avoidance of a kinetic collision between the two nuclear powers’ armed forces. The U.S. intelligence community will remain an adversary, like in the days of the Cold War, but at some point the need to deal with the growing threat from each other’s cyberweapons should bring the adversaries to the negotiating table.

There are many differences between the Cold War and the current U.S.-Russian confrontation. A salient one is that this confrontation is still essentially confined to the political and governmental spheres. Russia needs to keep it that way, making sure that, aside from the sanctions regime, trade, scientific and technological exchanges, and cultural and humanitarian ties with the United States are affected as little as possible. Russia’s conflict is with (most of) Washington, not with the rest of the United States. That conflict, in a nutshell, is about the world order and America’s — and Russia’s — place and role in it. That conflict will ultimately be resolved not in a U.S.-Russian confrontation but by what happens internally in both countries and by what others — above all China, but also others: Europe, India et al. — will be able to achieve. At some point, America and Russia might cease to be adversaries and become “normal,” if unequal, rivals. In the meantime, it is vital for the whole world that they do not inadvertently become true enemies.