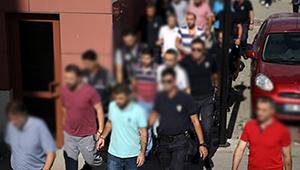 By TM
The Turkish Interior Ministry announced on Monday that 616 people have been detained in one week due to their alleged links to the Gülen movement, accused by the Turkish government of masterminding a botched coup attempt last summer.

The ministry said seven people have been detained over the past week on charges of disseminating terrorist propaganda on social media after investigations were launched into 682 social media users and the identities of 255 were confirmed.

Turkey survived a military coup attempt on July 15, 2016 that killed 249 people and wounded more than a thousand others. Immediately after the putsch the ruling Justice and Development Party (AKP) government along with President Tayyip Erdoğan pinned the blame on the Gülen movement.