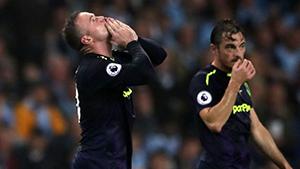 Wayne Rooney scored his 200th Premier League goal but a late strike from Raheem Sterling earned Manchester City a point in a 1-1 draw which saw both sides had a man sent off.

The 31-year-old is back at his boyhood club after 13 record-breaking years with Manchester United – an allegiance City fans reminded him of on Monday night.

Jeered from the outset at the Etihad Stadium, Rooney certainly enjoyed making it 1-0 to Everton in the 35th minute when he met strike partner Dominic Calvert-Lewin’s square pass with a left-foot finish through the legs of goalkeeper Ederson and in off the post. Only Alan Shearer, with 260, has more Premier League goals than Rooney.

The match further turned in Everton’s favour when two bookings in the space of three minutes just before the break saw £50million summer signing Kyle Walker dismissed – first for a challenge on Leighton Baines and then for a somewhat harsh aerial challenge on Calvert Lewin.

The 10 men of City pushed hard for an equaliser in the second half and it looked as though Ronald Koeman’s Toffees would hold firm to pick up a win they were 10/1 to achieve pre-match, only for Sterling to drill home with eight minutes remaining after Mason Holgate headed a Danilo cross into his path.

The numbers were evened up when Morgan Schneiderlin got his marching orders late on for a second booking after fouling Sergio Aguero but despite desperate pressure from the hosts to find a winner, both sides had to settle for a point.
Post-match reaction

On Kyle Walker’s sending off: “Next question please. I want to be in Bournemouth.”

On the performance: “It is one of the proudest days in my life to see how we’ve done, the way we’ve done it, 10 against 11. It was a good performance, it was similar to last season when we played them here (a 1-1 draw in October).

On Wayne Rooney: “In the first game when we played Stoke at home, there was a difference between him (Wayne Rooney) and the rest about cleverness in the game, view of the game and also tonight he had a big impact on the final result.”

On the result: “We’re disappointed. Of course maybe you will sign for that point before the game, but (we were) 1-0 up at half-time and 11 against 10. We had problems with keeping the ball and we played too fast the long ball. We worked really hard for the result, and one point is a good result.”

On Dominic Calvert-Lewin: “Maybe he did one of his best games tonight. He made it really difficult for the defenders of City with his pace, his strength and his headers. He showed tonight that number nine is his best position, but he’s a great young guy.”

On whether he’s finished his business in the transfer window: “I hope not. We are looking for a left-footed central defender, maybe a back-up for Leighton (Baines). That’s an option, and also a striker – even with the talent of Dominic and (Sandro) Ramirez. If we want to make the next step we need a striker as well.”
Wayne Rooney’s goalscoring record

For Everton: 17 goals
For Manchester United: 183

Rooney’s United goal tally is the most in the Premier League by any player for any one single club.