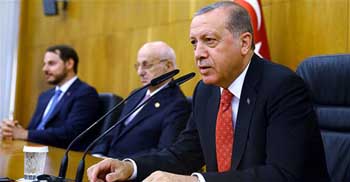 A joint military operation against the outlawed Kurdistan Workers’ Party (PKK) in the Kandil region along the Iraq-Iran border is on the agenda, Turkish President Recep Tayyip Erdoğan has stated.

“Taking joint action with Iran is always on the agenda,” Erdoğan told reporters on Aug. 21 before departing on a trip to Jordan.

Erdoğan said the PKK posed threats to both countries, and Iranian and Turkish officials discussed the struggle against the PKK and its Iranian branch, the Party of Free Life of Kurdistan (PJAK), during Bagheri’s visit.

“The two military chiefs discussed the work that can be carried out and its diplomatic dimension,” he added.

“The work will continue. As you know, the PKK terror organization has a foot in Iran. It has always caused harm to Iran and to us. We work because we believe that if the two countries cooperate, we can get results in a much shorter period of time,” Erdoğan said.

He did not offer further details on the timing or scope of the operation, and did not say where the operation would be focused. Media reports have suggested that Bagheri proposed the launch of a joint operation against the PKK in northern Iraq’s Kandil and Sinjar regions.

During Bagheri’s meeting, the two sides agreed to increase current cooperation on border security regarding the fight against the outlawed PKK group.

“The actions of Turkey and Iran complement themselves. We reached good agreements to prevent terrorists crossing from one side of the border to the other,” he said.

Turkey recently began building a “security wall” along part of its border with Iran, along the lines of a similar barrier on the Syrian border.

Meanwhile, Bagheri also stated that both sides were united in opposition to a plan by the leadership in Iraq’s autonomous Kurdish region to hold a referendum on independence on Sept. 25.

“Such geographical changes “could provoke tensions and clashes inside Iraq and would not be limited to that country,” he said.