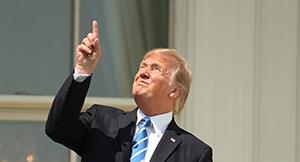 By Chris Ciaccia -FoxNews.com
After months of anticipation, planning and hype, the Great American Eclipse finally arrived on Monday.

Americans with telescopes, cameras and protective glasses staked out viewing spots along a narrow corridor from Oregon to South Carolina to watch the moon blot out the midday sun Monday in what promises to be the most observed and photographed eclipse in history.
Eclipse-watchers everywhere — and millions peered at the sun — fretted about the weather and hoped for clear skies for the first total solar eclipse to sweep coast-to-coast across the U.S. in practically a century.
The total solar eclipse, which happens around the globe once a year, will last just two and a half minutes, much shorter than other eclipses, according to Astrophysicist & Hayden Planetarium Director, Neil Degrasse Tyson.
“Perhaps a hundred million people will see it—that’s a great thing,” Tyson told Fox News earlier this year. “In a day where everyone can travel, there’s no reason why we shouldn’t have every single American in the path of totality.”
Totality first hit in Madras, OR. at 10:19 a.m. PDT, with Fox 12 Oregon taking a picture of the celestial event.
“It’s one of those ‘check the box’ kind of things in life,” said Hilary O’Hollaren, who drove 30 miles from Portland with her two teenagers and a tent, plus a couple friends.
The event captured the attention of millions across the country, including President Trump and his family.
Though New York did not experience totality, people posted to social media what they were seeing in the Big Apple.
Astronomers consider a full solar eclipse the grandest of cosmic spectacles.
The Earth, moon and sun line up perfectly every one to three years, briefly turning day into night for a sliver of the planet. But these sights normally are in no man’s land, like the vast Pacific or Earth’s poles. This will be the first eclipse of the social media era to pass through such a heavily populated area.
In a case of near-perfect celestial symmetry, the sun is 400 times the breadth of our moon and also 400 times farther away, so the two heavenly bodies look more or less the same size from our vantage point, and the moon can neatly cover up the sun.
The moon hasn’t thrown this much shade at the U.S. since 1918. That was the country’s last coast-to-coast total eclipse.
In fact, the U.S. mainland hasn’t seen a total solar eclipse since 1979 — and even then, only five states in the Northwest experienced total darkness.
The total solar eclipse is just one of several that have happened in the U.S. previously. The total solar eclipse that occurred in 1998 covered parts of the Northern and Southern hemisphere. The one in 1991 covered almost all of North America, except for certain parts of Canada, whereas this upcoming one is expected to be a worldwide phenomenon, Dr. Tyler Nordgren, a professor & author of “Sun, Moon, Earth,” said in a recent interview with Fox News.
The path will cut 2,600 miles across the land and will be just 60 to 70 miles wide. Shawnee National Forest in southern Illinois will see the longest stretch of darkness: 2 minutes and 44 seconds.
Mostly clear skies beckoned along much of the route, according to the National Weather Service.
All of North America was able to see at least a partial eclipse. Central America and the top of South America also saw the moon cover part of the sun.
NASA and other scientists watched and analyzed from telescopes on the ground and in orbit, the International Space Station, airplanes and scores of high-altitude balloons, which beamed back live video. Citizen scientists monitored animal and plant behavior as daylight turned into twilight and the temperature dropped.
Near Victoria, British Columbia, where 91 percent of the sun was eclipsed, science and math teacher Clayton Uyeda was going to watch from a ferry along with his wife. He said he was “expecting to have a real sense of connection with the heavens.”
He had similarly lofty hopes for his students if they could bring themselves to look up at the sky instead of down at their electronic devices.
Scientists everywhere agree with Uyeda: Put the phones and cameras down and enjoy the greatest natural show on Earth with your own (protected) eyes.
The only time it’s safe to look directly without protective eyewear is during totality, when the sun is 100 percent covered. Otherwise, to avoid eye damage, keep the solar specs on or use pinhole projectors that can cast an image of the eclipse into a box.
The next total solar eclipse in the U.S. will be in 2024. The next coast-to-coast one will not be until 2045.
The Associated Press contributed to this report. This story has been updated to include posts from social media.
Follow Chris Ciaccia on Twitter @chris_ciaccia