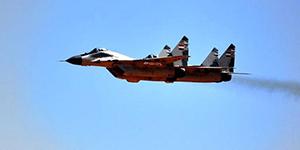 SANA reporter said that army units, in cooperation with the Lebanese Resistance, continued their operations against ISIS gatherings in the Western Qalamoun area, establishing control over the strategic area of Qarnet Shaabet Ekko, 2364 meters above sea level, in Jurd al-Jarajir.

As a result of this achievement, army units and the Resistance are currently observing the whole southern area of Western Qalamoun and have restored fire control over Jabal Halima, one of ISIS main hotbeds in the area, and on the entrances of the crossings of Shmeis Tim al-Mal, al-Qasira and Wadi al-Shahout to the west.

The Syrian Air Force destroyed fortifications and vehicles for ISIS terrorists in airstrikes against their gatherings
and positions in the eastern countryside of Hama and the southern countryside of Raqqa province.

A military source told SANA that the Syrian Air Force carried out intensive airstrikes against fortifications and positions of ISIS in
Jana al-Albawi village in the eastern countryside of Salamyia and Ma’adan city, 70 km to the southeast of Raqqa.

The source added that the sorties targeted gatherings and fortifications of ISIS- affiliated terrorist groups in Rasm al-Sawwanieh, to the southeast of Rasm al-Baroud and in Qasir al-Hir al-Sharqi in the eastern countryside of Homs province.

The source said that a number of ISIS vehicles, positions, and hideouts were destroyed in the airstrikes and scores of terrorists were killed.

An army unit clashed with ISIS terrorist groups in the area surrounding the graveyards area in Deir Ezzor, killing 7 terrorists and injuring many others, according to a military source.

The source added that another army unit destroyed fortifications and sites for terrorists in the neighborhoods of al-Huweiqa, al-Orfi and al-Rasafa in Deir Ezzor city.

The Syrian Air Force launched intensive airstrikes against supply routes and movements of ISIS terrorists in Maadan Atiq and al-Tabni villages and Tallet Alloush (hill), Mafraq al -Tharda and the area surrounding the graveyards, killing a number of terrorists and destroying their vehicles and fortifications.

SANA reporter said that army units engaged in clashes with ISIS terrorists on the axes of the graveyards and al-Panorama, in parallel with launching artillery, missile and air strikes on ISIS points and movements in the graveyards, al-Tharda, Mafraq al-Tharda and al-Orfi neighborhood.

The reporter added that more than 50 terrorists were killed, some of them are prominent leaders withing ISIS, after locals attacked them while they were at a meeting at the Salt Mine in the western countryside of Deir Ezzor.