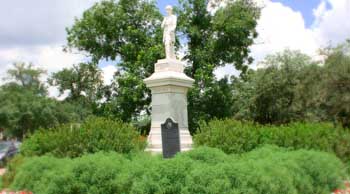 A man captured while trying to blow up a Confederate monument in Houston, Texas on Saturday has been charged with a federal crime. Andrew Cecil Schneck tried to drink the liquid explosives when he was approached by officers, the police said.
Schneck, 25, was spotted “among the bushes” near the statue of Confederate officer Richard Dowling in Houston’s Hermann Park on Saturday evening, after protesters demanding the removal of the statue clashed with those who wanted to see it remain.

A park ranger saw Schneck holding several boxes, including what appeared to be duct tape and wires, according to court documents cited by the Houston Press. Schneck tried to drink from a plastic bottle he was carrying. The liquid turned out to be nitroglycerin, Abe Martinez, US Attorney for the Southern District of Texas, said Monday.
A white powder found inside one of the boxes was identified as Hexamethylene triperoxide diamine, a chemical used in detonators.
Schneck was charged with “attempting to maliciously damage or destroy property receiving federal financial assistance.”
Houston police and the FBI raided the home owned by Schneck’s parents on Sunday and continued the search into Monday afternoon, local media reported. Neighbors were asked to evacuate for safety reasons, as the search turned up hazardous materials. According to Martinez, Schneck had been conducting “chemistry experiments” inside the house.
“Some very hazardous materials were found” inside the house, said Larry Satterwhite, assistant chief of homeland security for the Houston Police Department, without going into details.
This was the second time federal authorities raided Schneck’s home. He pleaded guilty in 2014 to federal charges of knowingly storing explosives, and was sentenced to five years’ probation. Schneck was granted early release in 2016, after his attorney argued he had “matured” and no longer engaged in high-risk activities.
Schneck had also paid $159,000 to the FBI and local agencies, to reimburse the cost of the investigation, and obtained a bachelor’s degree in classics and chemistry from Austin College.
Twitter Ads info and privacy
One of the refugees from Ireland’s potato famine, Richard “Dick” Dowling arrived in Houston in 1846. He fought in the American Civil War on the side of the Confederacy and ended up with the rank of major.
His greatest achievement was the September, 1863 Battle of Sabine Pass, in which his unit of 47 men turned back the Union force attempting to land in Texas – capturing two gunboats, 350 prisoners and a large quantity of supplies in the process.
A plaque dedicated to Dowling in his birthplace of Tuam in 1998 is also the only Confederate monument in Ireland.