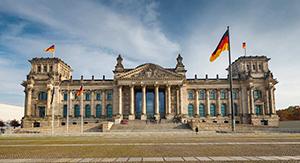 Judy Dempsey
Germany’s main political parties have no new ideas about the country’s role in Europe and don’t even debate reforms at home.

During Germany’s 2005 federal election campaign, then opposition leader Angela Merkel had ambitious plans. One of the biggest was a radical overhaul of the tax system to include a flat income-tax rate. Well, that went down like a lead balloon with the electorate. Merkel did become chancellor, but only just. Her narrow victory over the incumbent, the Social Democrat Gerhard Schröder, convinced Merkel that caution was preferable to ambition.
And so it is with this year’s election, as Merkel makes a bid to remain in the Chancellery for a fourth term. Yet instead of presenting new and bold ideas about integration and digitization, energy policy and Europe’s future, Merkel and the leaders of the other main parties are playing it safe and predictable.
Merkel’s own Christian Democratic Union party has created a kind of personality cult around the chancellor. Stability, security, and a fair wage are the main themes. Not a mention of a Germany that is open to the world. Indeed, the Christian Democrats and their sister party, the Bavarian-based Christian Social Union, have done almost everything possible to avoid any discussion about integrating the 1 million or so refugees and migrants who have arrived in Germany over the past few years.
Nor in television interviews are there discussions about globalization or how to deal with the threat of protectionism emanating from the United States. In short, foreign and domestic policies hardly get a look in.
One would imagine that the liberal, pro-business Free Democratic Party (FDP) would be the natural party to home in on these issues. Having been ousted from the Bundestag in the 2013 election after failing to gain 5 percent of the vote, it seems poised to reenter the federal parliament this time round.
The FDP is not campaigning to reduce red tape or abolish the anomalies of the tax system. It hasn’t dared to mention why German industry and the public are unprepared for digitization, which will have a profound impact on employment, education, and demography.
Instead, in Berlin, the FDP proclaims that it is the party that will rescue Tegel Airport from closure. The fate of this airport depends on the outcome of a referendum on whether to keep it open, to be held on September 24, the same day as the German election. The Free Democrats have latched onto this issue, even though the airport is now too small. Moreover, the party—similar to other parties—has not criticized the mismanagement, spiraling costs, and several postponements of a new airport that is being built just beside Schönefeld, Berlin’s other congested airport.
Maybe it’s because a section of the public is fed up with Germany’s grand coalition of conservatives and Social Democrats that it is ready to give the Free Democrats a chance. Yet they had an opportunity to introduce domestic reforms back in 2009–2013, when they were Merkel’s junior coalition partner. It is hard to recall anything memorable about the party except that its leader, who was also Germany’s foreign minister, Guido Westerwelle, abstained from a UN Security Council resolution to intervene in Libya that later mutated into a NATO mission in which Germany did not take part. Highly criticized at the time, in retrospect Berlin may have been vindicated by that decision as Libya descended into anarchy when its leader Colonel Muammar Qaddafi was overthrown.
As for the Social Democrats, they have been dogged by two things: their inability to distance themselves from Merkel, and Schröder’s negative influence in the campaign.
Social Democratic contender for chancellor and former president of the European Parliament Martin Schulz, who says in interviews that he can unseat Merkel, has been playing the anti-American and anti-NATO cards.
Pandering to latent German pacifism, he and Sigmar Gabriel, Germany’s Social Democratic foreign minister, have criticized a pledge by all NATO members to spend at least 2 percent of GDP on defense. Regardless of the pros and cons of such a target, Merkel responded by reminding the Social Democrats that they had agreed to that target. Merkel has dealt with the anti-American rhetoric by saying that Europe has to start looking after itself, without going into any substantial detail.
Then there is the Schröder effect, which has only helped the Christian Democrats. Schröder, who since 2005 has been on the payroll of Russian energy giant Gazprom for his role in the controversial Nord Stream pipeline, which will bring Russian gas to Germany under the Baltic Sea, was appointed on August 11 to the board of Russia’s state-owned oil giant Rosneft. Rosneft is under Western sanctions because of Russia’s annexation of Crimea in 2014.
While the Social Democrats try to find some traction with voters, it has fallen to the Left, the inheritor of the former East German Communist Party and now a radical left-wing party, to mock the centrist views of the Social Democrats. As for the Greens, whose leaders have ambitions to be part of the next government, they seem to have run out of ideas, because all political parties embrace environmental causes.
That leaves the anti-immigrant, anti-Islam, Euroskeptic Alternative for Germany. It is making a big bid to enter the Bundestag as it promotes a nationalist agenda. However, the party has often been paralyzed by infighting and its direction. One of its leading members described Berlin’s Holocaust memorial as a “monument of shame.”
Such are the choices facing German voters. More of the same seems in the cards. But whoever wins on September 24, such complacency from the leaders of Europe’s largest economy could be Germany’s Achilles’ heel.