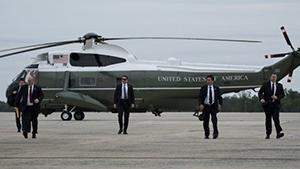 The US Secret Service is facing a strain on its budget due in part to President Donald Trump’s large family and multiple properties.
Secret Service Director Randolph “Tex” Alles said some 1,100 agents will hit their overtime allowance caps for the year.

Under Mr Trump, 42 people receive protection, an increase from 31 people during the Obama administration.
The Secret Service said it struggled with a “similar situation” last year.
Among those currently protected are 18 members of the Trump family, who have required security on international business trips to promote Trump properties as well as family holidays.
Some of the bills, according to the USA Today report, include:
• Estimated $3m per visit to Mr Trump’s Mar-a-Lago golf resort in Florida
• Some $60,000 on golf cart rentals at both Mar-a-Lago and his Bedminster, New Jersey, golf club
• Nearly $100,000 on hotels to protect the president’s son, Eric Trump, during a business trip he took to Uruguay
Other trips requiring security included visits in February by both Eric Trump and Donald Trump Jr to Vancouver, British Columbia, to open a new Trump hotel there, and to Dubai for the opening of a Trump International Golf Club.
Ivanka Trump and her husband, Jared Kushner, required Secret Service security during their ski holiday in Aspen, Colorado, in March.
Tiffany Trump and her boyfriend have received protection on recent trips to Germany and Hungary.
In a statement released on Monday, Mr Alles said the agency has been working with the Department of Homeland Security, the Trump administration and Congress to find a legislative solution to the “serious problem”.
“This issue is not one that can be attributed to the current Administration’s protection requirements alone, but rather has been an ongoing issue for nearly a decade due to an overall increase in operational tempo,” he said.
But Mr Alles said the Secret Service had enough funds to “meet all current missions requirements for the remainder of the fiscal year and compensate employees for overtime within statutory pay caps”.
He said he expects the strain on the agency to be relieved as it increases its current force of 6,800 agents and uniformed officers to as many as 9,500 by 2025.
Secret Service resources have been exhausted since last year’s tumultuous presidential election.
The agency’s expenses since Mr Trump’s inauguration covered seven trips to Mar-a-Lago, five visits to Bedminster and a trip to Trump Tower in Manhattan.
Earlier this month, the Secret Service moved out of Trump Tower in Manhattan to a nearby trailer after a lease dispute between the government and the Trump Organization, US media reported.

US sends reinforcements for Afghan withdrawal