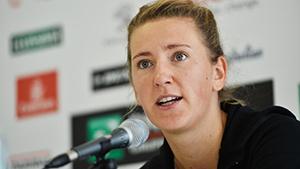 Victoria Azarenka has pulled out of the US Open due to a dispute with her former partner over the care of their baby son.

The former world number one returned to the sport in June, six months after the birth of Leo, and reached the fourth round at Wimbledon.

But she has not played since, citing a viral illness for pulling out of a tournament in Stanford before later revealing she was engaged in a custody battle with Leo’s father Billy McKeague.

In a statement released on Monday the 28-year-old Belarusian wrote: “I am sadly unable to compete in this year’s US Open due to my ongoing family situation that I am working through.

“While I will dearly miss being in New York and playing in one of my favourite tournaments where I have enjoyed some of the best moments in my career, I am already looking forward to being back next year.”
Azarenka broke her silence on the issue last week, revealing she would only have been able to play at Flushing Meadows had she left Leo at home in California, something she was not prepared to do.

She had hoped an agreement would be reached with McKeague, from whom she separated last month, that would have allowed Leo to travel with her to New York.

However, the two-time finalist has withdrawn, with the US Open confirming Japan’s Misa Eguchi has taken her place in the main draw ahead of the start of the tournament later this month.

On August 17 Azarenka wrote on Twitter: “My incredible fans and friends, who have supported me throughout my career, deserve to know why I may not be able to compete at the US Open this year.

“Shortly after Wimbledon, Leo’s father and I separated and, as we work to resolve some of the legal processes, the way things stand now is that the only way I can play in the US Open this year is if I leave Leo behind in California, which I’m not willing to do.

“I look forward to hopefully having positive developments soon so that this difficult situation can be resolved and I can get back to competing. No parent should have to decide between their child or their career.

“I remain optimistic that in the coming days Leo’s father and I can put aside any differences and take steps in the right direction to more effectively work as a team and agree on an arrangement for all three of us to travel and for me to compete but, more importantly, to ensure that Leo has a consistent presence from both of his parents.”