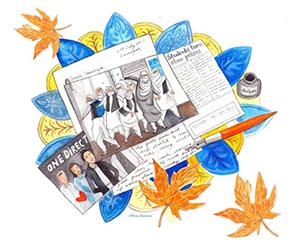 What is life like for a young girl growing up in Indian-administered Kashmir, one of the most heavily militarised zones in the world? How different is it to that of a girl living in the Indian capital Delhi? BBC Hindi’s Divya Arya asked two teenagers, Duaa from Srinagar and Saumya in Delhi, to become pen pals. Here are edited excerpts from their letters:

Introductions
Dear Saumya,
A very warm and pleasant salam (greetings) from a place known to be heaven on Earth – Kashmir.
You must be curious about Kashmir. It’s so chilly here. Can you even imagine seven feet of snow everywhere around you, taller than you?
I’m a big music freak and love artists like One Direction (although they are currently on a hiatus), Little Mix, Zayn Malik, Selena Gomez and Justin Bieber. I feel that telling you about the music I love will tell you more about me than I ever can.
Dear Duaa
I got your letter and am very happy to know that you are also a fan of One Direction!
If I were to tell you about myself, then I’d say that I’m very different from other girls (that’s what I think). I just don’t like to dress up like other girls.
These days, Kashmir is in the news especially because of “stone-pelting girls”. Can you tell me more about this, why are girls doing that? Are they really being harassed or troubled?

Self defence and stone-throwing
Throwing stones at the police and soldiers is a common form of protest in Indian-administered Kashmir, where civilians and security forces often clash. People in the state have been rebelling against Indian rule since 1989. Kashmir is claimed in its entirety by India and Pakistan but the two countries only rule parts of it. India often blames Pakistan for fuelling unrest in the region, a charge Islamabad denies.
Dear Saumya
To outsiders it may appear that the girls are pelting stones for nothing, but there is a story behind it.
A leading female football coach was teaching some girl students in a ground. On the first day nothing happened, everything went on smoothly.
But on the second day as they were practising, the military started firing in the ground. I don’t know why.
Naturally the girls panicked and started to run, hide, doing whatever to save their lives.
Then the coach, showing good presence of mind, picked up some stones nearby and started pelting, and the girls soon followed their coach.
The stone-pelting was purely an act of self-defence. What would you have done if you were in that situation? Please answer that question. I want to know.
Dear Duaa
I am fine here and my family is also doing well.
After reading your last letter, it became clear that our society is not safe for girls, whether it is in Delhi, Kashmir or any other place.
Girls in Delhi do keep some things with them for self-defence but even then they are harassed. Like recently in Haryana, an incident like the 2012 gang rape and murder of a female student in Delhi was repeated with another girl. In that sense, no Indian city is safe.
I’d like to tell you that if I would get stuck in such a situation, I would have reacted in a similar way to protect myself.
Also often we hear that schools and colleges are shut and internet services also closed down. When schools and colleges are shut, how is the course completed?
And when internet services are shut down then how do you remain in touch with your friends and remain active on social media?

Life without internet
The internet is regularly shut down by the Indian government when tension is high in the Kashmir valley. It was blocked 20 times in 2017 according to Human Rights Watch. Indian authorities said they did it amid violent unrest to stop “anti-government elements” from spreading “objectionable contents”.
Dear Saumya
When schools are shut, we students have to complete the whole course ourselves and if the shutting of schools coincides with the snapping of internet services – it is a headache.
Can you imagine being confined to the four walls of your home with no internet, no social media. We live in the era of internet, the 21st Century, but sometimes I feel that I am living in the 14th Century.
The snapping of these basic services always gets to my nerves because every human has the right to information and by snapping the internet, I feel we are being denied that right.
Dear Duaa
One can’t even imagine life without the internet or other means of communication in Delhi. I feel very bad that people in Kashmir have to live through such difficult circumstances.
But are only some miscreants responsible for this situation or is there some other reason? If it inconveniences people there so much, then why is internet and social media shut down there?
I saw the photos of Sonmarg that you sent. And after seeing them I feel like coming to Kashmir.
Would you like to live in any other Indian city for your higher studies? And can any student from Kashmir live comfortably and happily in any other city in the country?

Dear Saumya
Let me first make it clear that it wasn’t the army but security personnel and police. And it is a mystery that they attacked the girls in the first place. Nobody knows, nobody but them.
As for your other question, I wouldn’t like to be in any other Indian city because honestly I am frightened.
There has been news, I’m sure you would have heard, that many Kashmiri students including girls being victims of various kind of “ragging”. (Ragging is a form of abuse often meted out to college newcomers.)
Students have been thrown out of the college in the dead of the night just for being Kashmiris.
As for the internet ban, only the government can answer why they are imposing bans. Honestly, people have become used to this scenario.

The meaning of freedom
“Azadi”, which means freedom, is a controversial word in Indian-administered Kashmir, where it has become a rallying cry against Indian rule.
Dear Duaa
When I read about a man being used as ‘human shield’ in the newspaper, it made me very sad. Such incidents only encourage more inhuman activities.
Sometimes I wonder can’t we end this inhumanity from human society? And that there are no restrictions to go or come from any part of the world.
Sometimes I get to know from newspapers that Kashmiris want freedom. I want to know who they want freedom from.
Dear Saumya
We want freedom from cruelty of the world, freedom from indiscrimination, freedom from the people who think that we are inferior to them.
Trust me we are not inferior but equals.
I know it must sound confusing, but if you really want to understand what Kashmiris want freedom from then I highly recommend you watch the Bollywood film, Haider.
I’m informed that this is my last letter to you for the project, but I’m closing it with a hope that we will still be pen pals.
Dear Duaa
I was a little hesitant to ask you about the freedom of Kashmir but I couldn’t hide my curiosity and I really liked your reply.
The kind of freedom that the Kashmiris want is something that the whole of humanity seeks.
The newspapers are coloured with examples of cruelty and disgust- some days a drunken father beats up his son, other days the son beats up his aged father. A one-sided love leads to an acid attack or a lover brutally guns down his girlfriend.
I want to know more about the demand for freedom of Kashmir and that’s why I want us to keep writing to each other. That will be great!
I hope we keep writing to each other.
Lots of love
Your friend
Saumya