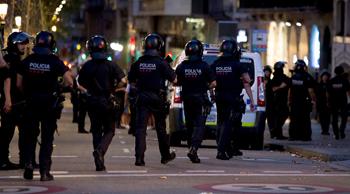 A High Court judge in Spain has announced a ruling on the four surviving suspects in last week’s terrorist attacks in which 15 people were killed and over 100 injured. Two of the men suspected of involvement in the terrorist plot have been ordered to be held without bail, but one freed on certain conditions.

Mohamed Houli Chemlal, 21, and Driss Oukabir, 28, were ordered to be sent to jail on preliminary charges of terrorist murder and of belonging to a terrorist organization.
Sahl El Karib will remain under arrest for at least another 72 hours, while suspect Mohamed Aalla was released on probation, with an obligation to appear at the nearest court to his address next week, El Mundo reports.
The judge ruled the evidence to keep holding Aalla was “not solid enough.”
The court order was issued Tuesday by the National Court judge, Fernando Andreu, after he heard the four men answer questions in connection with vehicle attacks in Barcelona and Cambrils.