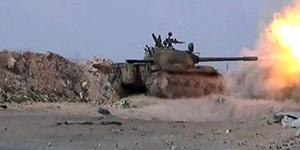 Provinces, SANA – In the framework of their continued operations against ISIS hotbeds in the area of Oqairbat in the eastern countryside of Hama province, Syrian Arab Army units, in cooperation with the supporting forces, have carried out intensive operations in the direction of Jana al-Albawi village over the past night.

SANA’s reporter said that full control was established over the strategic hill of al-Mahsa near the village of Jana al-Albawi to the north of Oqairbat town, the main stronghold of ISIS terrorists in the eastern countryside of the province.
The reporter added that army units combed the hill completely as they dismantled tens of explosive devices and mines, and they discovered a lot of tunnels and positions belonging to the terrorist groups, seizing all the arms and ammunition inside them.
Deir Ezzor
The Syrian Air Force and Russian Aerospace Forces launched intensive strikes against ISIS sites, fortifications and supply routes in Alloush Hill, the area
surrounding the graveyards and Wadi al-Tharda road in Deir Ezzor, according to a military source.
As a result of the airstrikes, at least 15 terrorists were killed, others were injured and a number of vehicles, some of which equipped with heavy machineguns, were destroyed.
SANA reporter in Deir Ezzor said that army units engaged in clashes with ISIS terrorists in the graveyards area and al-Rushdiyeh neighborhood during the night, killing and injuring a number of ISIS terrorists.
In a relevant context, local sources from the city of Deir Ezzor said that one of the buildings in Kanamat neighborhood totally collapsed after the basement of the building, which was used by ISIS terrorists to manufacture explosives, exploded and all terrorists inside it were killed.
The sources added that a number of the locals in the eastern countryside of Deir Ezzor have freed some 50 abductees from one of ISIS dens in Gharanij town and transported them to a safe place, noting that the locals burned a tanker truck that was used by ISIS to transport stolen crude oil in Buqros village.
The local sources confirmed the death of Abu Mouaz al-Orduni, one of the security officials of ISIS at the office of so-called “Wali of the Area”. The terrorist’s dead body was thrown near Masaken al-Qitar north of Deir Ezzor city. ISIS also executed one of its media men who is called Ali Radi after he tried to escape.
The sources added that ISIS kidnapped the members of 6 families while they were trying to escape the area near al-Kasra town to the west of Deir Ezzor, adding that the organization beat the men and forced the women and children to go back.
Homs
Army units, in cooperation with backup forces, advanced more into the depth of al-Badia (desert) and expanded its control in the eastern countryside of Homs, after inflicting heavy losses to the ISIS in personnel and equipment.
A Military source told SANA that the army units, in cooperation with backup forces, regained villages and towns of al-Tiba, al-Tibal Castle, Dhahar al-Hamra, Seidet al-Sen, al-Latoum al-Sharqi, al-Latoum al-Gharbi, al-Sheikh Ibrahim, al-Qebab al-Faransia, Qasr al-Hayr al-Sharqi and al-Souk.
Later, the Army units established control over the areas of Hoisis, Tolol Qaret al-Tahin and Qbour al-Shaalan and a number of strategic points and new areas to the west of Shaer Mount in the eastern countryside of Homs.