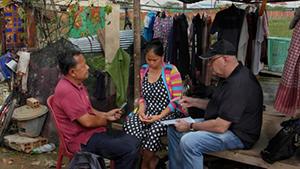 Lindsay Murdoch
Cambodia is set to permanently ban commercial surrogacy, ending hopes of Australian parents intending to enter into any arrangements with surrogate mothers in the impoverished country.

A draft law imposing the ban is likely to be passed by Cambodia’s parliament early next year.

Surrogacy operators had been confident the government in Phnom Penh would allow commercial surrogacy under strict supervision, legalising what was a booming industry until it was shut down during a crackdown late last year.

But Phon Puthborey, a spokesman for the Women’s Affair Ministry, told the Cambodia Daily the “main content of the law is that we absolutely ban commercial surrogacy and any actions that get benefit or profit from surrogacy [are] completely banned”.

Cambodia became the Asian hub for surrogacy after clinics and surrogacy operators were chased out of India, Nepal and Thailand.

More than 70 Australian couples entered into surrogacy agreements in Cambodia before the crackdown, leaving them facing difficulties in obtaining travel documents so they could take their babies out of the country.

The crackdown sent hundreds of surrogate mothers into hiding, fearing arrest, where many were not able to receive medication and treatment.

Earlier this month Melbourne nurse Tammy Davis-Charles was sentenced to 18 months’ jail in a Phnom Penh court for paying Cambodian women to have surrogate babies for Australian couples.

Witnesses told the court she had charged $US50,000 ($63,000) to broker the birth of each of 23 babies, mostly for Australian couples, through her company Fertility Solutions PDG.

The verdict shocked Davis-Charles, a 49-year-old mother of six, who had pleaded for leniency, saying she had lost everything and is suffering from eye cancer.

She and two of her employees are the only people who have faced surrogacy charges in the country.

Stephen Page, a Brisbane-based lawyer who specialises in surrogacy, told the Daily the ban had “long been predicted”.

“The ban was entirely inevitable because of the failure of the government to properly regulate surrogacy in the first place,” he said.

“If the government had not allowed the wild west to operate, we wouldn’t be discussing it now.”

Sam Everingham, global director of the Australian consultancy Families Through Surrogacy, said last year that Cambodia’s surrogacy infrastructure was a hastily built rollercoaster with a high-risk of collateral damage when it inevitably crashed.

“Recruiting illiterate surrogates in a country with high levels of corruption to carry – in many cases – twin pregnancies for foreigners is not a humane, sustainable business model,” he said.

But Attorney-General George Brandis has not acted on recommendations for Australia to allow well-managed domestic surrogacy, so fewer Australians will go overseas to enter into surrogacy arrangements.