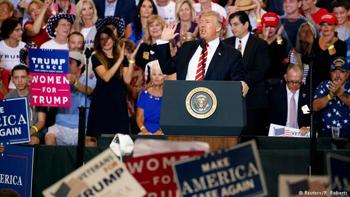 “I didn’t say I love you because you’re black, or I love you because you’re white,” Trump said to a cheering crowd at the convention center. “I love all the people of our country.”
He criticized the media for giving a “platform to hate groups.”
“These are truly dishonest people. They’re bad people. I really think they don’t like our country,” Trump said. He also accused the mainstream media of ignoring gang violence.
Trump has been widely criticized for saying that the violence in Charlottesville that killed one person was the result of poor behavior “on many sides,” comments broadly interpreted as an unwillingness to single out white supremacists.
Outside the convention center, thousands protested in 100-degree heat (38 degrees Celsius) against Trump’s presidency, some waving banners showing Trump with a Hitler-style mustache. Others read “Toxic Trump” and “Lock him up.”
There were also Trump supporters, with some chanting “Build the wall,” referring to the planned border wall between Mexico and the US. Many wore red hats with Trump’s campaign slogan, “Make America Great Again.”
Violent protests
The protests started peacefully but turned violent, with some throwing rocks and bottles at police, who were forced to keep supporters and opponents separate and use pepper spray. Many had to be treated for dehydration and other heat-related problems.
Meanwhile Trump covered a variety of issues, from the conflict with North Korea to the NAFTA trade talks, which he again said he might terminate. Trump argues that terminating the deal would provide impetus to ongoing negotiations on altering NAFTA’s terms.
Trump has repeatedly blamed various free trade agreements for working against the American people and its economy.
The US president also hinted again that he might consider pardoning Joe Arpaio, a controversial former sheriff convicted last month of criminal contempt in a racial profiling case.
Arpaio, the sheriff of Maricopa County in Phoenix before he lost a re-election bid in 2016. is an outspoken opponent of illegal immigration. The 85-year-old also became known for investigating former President Barack Obama’s birth certificate and his continuing groundless claim that it was forged.
ng/msh (AP, Reuters, dpa)