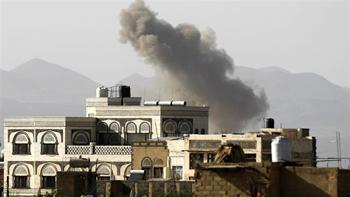 Dozens of people have lost their lives in fresh air raids conducted by Saudi warplanes against residential areas in Yemen’s western Sana’a Province.
Arabic-language al-Masirah television network reported Wednesday that the bodies of at least 30 people were recovered from the rubble of an inn in Sana’a province’s Arhab district, which was hit by Saudi air raids.

The death toll is expected to rise as an estimated 70 people were in the inn prior to the aerial assaults.
Meanwhile, the Saudi air raids, which targeted security centers in the south of Sana’a City, killed two Yemenis and injured over 10 others, according to the report.
Separately on Wednesday, Yemeni army soldiers and allied popular forces launched rocket and artillery attacks on positions held by Saudi mercenaries in several areas across Yemen.
The attacks killed tree Saudi mercenaries in Yemen’s southern Ta’izz and Bayda provinces
Saudi Arabia has been leading a brutal military campaign against Yemen for more than two years to eliminate the Houthi movement and reinstall Riyadh-friendly former president, Abd Rabbuh Mansur Hadi.
The Saudi aggression, however, has failed to achieve its goals despite spending billions of dollars on the war and enlisting the cooperation of its vassal states as well as some Western countries.
The protracted war, which has been accompanied by a naval and aerial blockade on Yemen, has so far killed over 12,000 people and led to a humanitarian crisis in the impoverished state.
Saudi Arabia has come under international criticism over mounting civilian casualties in Yemen.