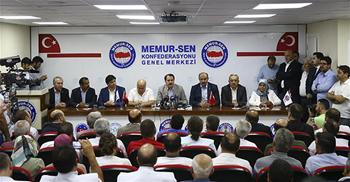 The government and unions have come to an agreement over a salary rise offer for millions of civil servants and retired civil servants in Turkey, covering 2018 and 2019.

She added that the government strongly realized the rise in prosperity of public workers in an environment that the inflation rate is expected to decrease in the medium-term.

“We reached a consensus on 258 articles in the contract. This is the highest point that we have reached in the process so far. Some 70 new articles were revealed as the first achievement for our public workers and retired civil servants. We realized a very serious improvement in 50 articles,” Sarıeroğlu said.

Meanwhile, Memur-Sen head Ali Yalçın said both sides had pushed all the limits over the 21-day tough negotiation process and came to an agreement.