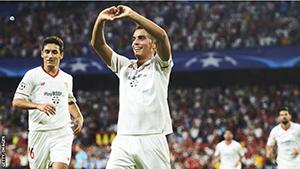 Sevilla, Napoli, NK Maribor and Olympiakos booked their place in the Champions League group stage with victory in the play-off round.

Sevilla survived a major scare as their 2-2 home draw with Istanbul Basaksehir gave them a 4-3 aggregate win.

Napoli beat Nice 2-0 on the night, 4-0 on aggregate, while Olympiakos won 1-0 at Croatian side HNK Rijeka to progress 3-1 on aggregate.

Maribor edged through on away goals with a 1-0 win over Hapoel Be’er Sheva.

Celtic also made it through earlier on Tuesday with a 8-4 aggregate victory over Astana while Liverpool can book their place in Thursday’s group stage draw on when they host Hoffenheim on Wednesday, leading 2-1 from the first leg.

La Liga’s Sevilla had taken a one-goal lead into Tuesday’s second leg but that was wiped out by Eljero Elia’s first-half opener.

Goals from Sergio Escudero and Wissam Ben Yedder looked to have secured Sevilla’s progress past their Turkish opponents but Edin Visca pulled one back in the 83rd minute.

With the visitors needing just one more to go through on away goals, Basaksehir’s ex-Newcastle midfielder Emre Belozoglu hit the post in stoppage time but Sevilla held on to progress.

Serie A side Napoli travelled to Nice with a two-goal cushion from the first leg and comfortably reached the group stage thanks to second-half goals from Jose Callejon and Lorenzo Insigne.

Former Chelsea midfielder Marko Marin scored the only goal for Olympiakos as the Greek side wrapped up a comfortable win over Rijeka.

Mitja Viler’s 15th-minute strike was enough to send Slovenian side Maribor through on away goals against Hapoel Be’er Sheva of Israel with the tie finishing 2-2 on aggregate.