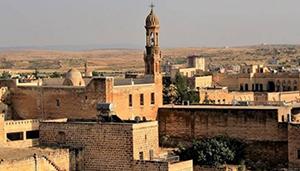 By TM
Syriacs living in southeastern Turkey are considering moving back to Europe after their assets, including churches were seized by the Treasury, Gazete Karınca reported.

Following the confiscation of their properties, many Syriacs, one of the world’s oldest Christian communities, are temporarily returning to Europe to live together with their families and they are asking for a peaceful atmosphere to be ensured for these returns not to be permanent.
An Al-Monitor report said last month that around 50 properties belonging to the Syriac Orthodox Church were seized by Turkish authorities who claimed that the ownership deeds had lapsed. Mor Gabriel monastery applied for an appeal, which was rejected by a special commission working on the liquidation of the assets.
The commission began last year to transfer assets which were considered invalid following a municipal reform. Dozens of houses of worship, cemeteries and other properties of the Syriac community were confiscated by state authorities.
Some of the assets, including churches in Mardin province that were owned by the Syriac community, were seized by the Treasury and were planned to be transferred to the Religious Affairs Directorate. While a special commission established under the Mardin Governor’s Office cancelled a decision to transfer Syriac churches and monasteries to Turkey’s Religious Affairs Directorate, the fate of assets remains unclear.
Syriacs living in Mardin are also concerned about the insecure political and economic situation and the Turkish government’s approach to different beliefs and cultures and fear for their lives.
Renate Sommer, a member of the European Parliament from the Christian Democratic Union, part of the European People’s Party, harshly criticized the decision of seizure and said the Syriacs were at risk of being wiped out in Turkey.
The Syriac community has a total of seven foundations in Turkey, most of which are located in Mardin. According to Turkish officials, there are approximately 25,000 Syriacs living in Turkey, 18,000 of whom are in İstanbul, with the rest scattered in eastern and southeastern provinces.
Approximately 3,000 Syriacs had migrated from Europe to Turkey in the 1980s.