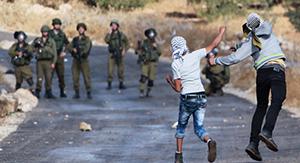 The Kids Aren’t Alright
Marwan Muasher – CARNEGIE
A younger generation of Palestinians is no longer committed to a two-state solution.

Ever since the signing of the Oslo Accords between the Palestinians and Israelis in 1993, the international community has assumed that the logical conclusion of the ensuing negotiations is a two-state solution—a Palestinian and an Israeli state living alongside one another in peace.
That dream has been slowly eroding, even as the world has chosen to ignore the dramatic developments that have occurred since then: the advent of a rightwing Israeli government in 2015 not interested in such an outcome; a ten-year-old split between the West Bank and the Gaza Strip that has left the Palestinian government weak and indecisive; and a settlement expansion that has resulted in more than 600,000 Israelis living in the West Bank and East Jerusalem.
The international community continues to adhere to the two-state paradigm, under the pretext that this preferred outcome of the conflict will ultimately prevail. But how true is that of the Palestinians? Increasingly, the Palestinian population under occupation—particularly the younger generation—appears to be refusing to support what it regards as an outdated framework that only seems to indefinitely prolong the occupation.
As a recent Carnegie report on Palestine, “Revitalizing Palestinian Nationalism: Options Versus Realities,” shows, while a majority of Palestinians still prefers a two-state solution, most also think it is no longer possible. A not always quiet shift is occurring from a struggle focused on the shape of a solution—a Palestinian state—to one centered on rights. This is manifesting itself in different forms, as in the Boycott, Divestment, Sanctions campaign, the violent clashes in Al-Aqsa mosque in 2015 and again in July of this year, or other such activities. The new generation almost completely mistrusts the traditional Palestinian leadership, whether Fatah or Hamas, and is resorting to sub-national, civil society-led initiatives to find expression for its aspirations. While faith in Palestinian institutions is rapidly declining, Palestinian identity remains strong.
New policy alternatives are also being discussed, even while they have not yet gained the approval of most Palestinians. Some form of binationalism, where Palestinians and Israelis share a single state, is now being actively debated in Palestinian circles. It is true that many Palestinians do not want to abandon the gains achieved in highlighting their Palestinian national identity after the start of the Oslo process, but there are those now willing to entertain the idea that if a Palestinian state is not possible, the only viable alternative is equal rights within the state under which they presently live.
Another shift is already occurring among Palestinians who are citizens of Israel. The lack of seriousness of the Israeli government to end the occupation, coupled with an increasingly hardline—almost racist—attitude by the government against its Palestinian citizens, has caused a significant shift in political activity by the latter group. A series of new discriminatory laws to emphasize only the Jewish nature of the state and suppress its Arab component has caused the Palestinians of Israel to unite. For the first time in the state’s history, a unified Arab list ran in the last elections of 2015, winning thirteen seats and becoming the third largest bloc in the Knesset. This trend can only continue with a demographic shift in favor of the Arab citizens of Israel.
Finally, one can no longer ignore broader demographic realities in Israel, the West Bank, and Gaza. According to official Israeli statistics, the number of Palestinians and Jews living in these areas reached parity in 2017 at 6.4 million each. This makes a two-state solution more difficult as the separation of the two communities has become nearly impossible. However, it might embolden the Palestinians to push for a one-state solution in which they will soon become a majority.
All of these developments point to one conclusion: Other alternatives to a two-state solution can no longer be ignored by the international community. They are certainly not being ignored by the Palestinian population under occupation. Wishing for a two-state solution, or believing that it is best for a resolution of the conflict, does not ensure its realization. For better or worse, other alternatives are no longer taboo issues, or even improbable.
The world will do well to watch carefully the shifts occurring within Palestinian society, and to listen to a new Palestinian generation no longer willing to live within the boundaries set by its parents.