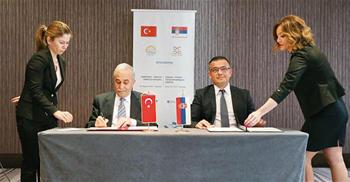 Turkey and Serbia signed a trade agreement on agriculture on Aug. 22, the first since 2011.

Ahmet Eşref Fakıbaba, the Turkish minister of food, agriculture, and livestock, and Branislav Nedimovic, the Serbian minister of agriculture, met in Serbia’s capital Belgrade to discuss ways to improve import and export between the two countries.

The agreement aims to boost the export of sunflower oil, fruits, and vegetables between the two countries, and increase bilateral trade to $1 billion.

Fakıbaba, in a joint press conference after the signing ceremony, said Serbia had a decisive role to play for peace and stability in the Balkan region.

“We give great importance to improving our relations in every area, especially in the economy,” he said.
He asked Turkish businessmen to increase investment in Serbia, adding that Serbia should provide them incentives.

“Serbia is very important for us, Serbia is our great friend. We need to put a little more effort to reach $1 billion in trade volume—our common goal,” he said.

Fakıbaba said if Belgrade allows a free trade zone to Ankara, it could enter markets in Russia and the European Union, with which it has free trade agreements.

In return, he added, Turkey could open its market to Serbia.

Nedimovic said they had focused on three main issues—updating the Free Trade Agreement, creating new quotas for various agricultural products, and investment in the livestock and fruit sector—during their talks.

“Of course, this must satisfy the two sides. Our offer was beef and sunflower oil exports. This way we aim to increase production,” said Nedimovic.

He said they were open to Turkish investors, and that Turkey could be a milestone for them in the Middle East and Asian markets.

Nedimovic estimated that the free trade agreement signed eight years ago between the two countries had made a fivefold increase in trade in the agriculture sector.

There are 75 Turkish private investments in Serbia’s textiles, food, and construction sectors, totaling around $110 million.