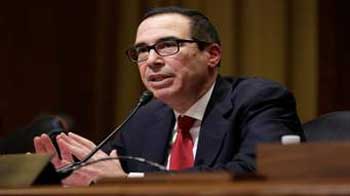 The U.S. Treasury designated six Chinese-owned entities, one Russian, one North Korean and two based in Singapore. They included a Namibia-based subsidiary of a Chinese company and a North Korean entity operating in Namibia.
The sanctions also targeted six individuals – four Russians, one Chinese and one North Korean.
The move follows toughened United Nations sanctions agreed this month after North Korea tested its first two intercontinental ballistic missiles in July.
China reacted with irritation, saying Washington should “immediately correct its mistake” of imposing unilateral sanctions on Chinese companies and individuals to avoid damaging bilateral cooperation.
The Russian embassy did not respond to a request for comment.
The U.S. Treasury Department said the new sanctions targeted those helping already-designated individuals supporting North Korea’s nuclear and ballistic missile programs and its energy trade. They included three Chinese coal importers.
The steps also targeted those helping North Korea send workers abroad and enabling sanctioned North Korea entities to get access to the U.S. and international financial system.
“Treasury will continue to increase pressure on North Korea by targeting those who support the advancement of nuclear and ballistic missile programs, and isolating them from the American financial system,” Treasury Secretary Steven T. Mnuchin said in a statement.
“It is unacceptable for individuals and companies in China, Russia, and elsewhere to enable North Korea to generate income used to develop weapons of mass destruction.”
The U.S. Justice Department is also seeking forfeitures of $11 million from firms that allegedly laundered money for North Korean banks. The firms include Singapore-based Velmur Management and Transatlantic Partners, and China-based Dandong Chengtai Trading Co, also known as Dandong Zhicheng Metallic Material.
A new round of U.S. sanctions had been expected, but Washington appeared to delay them while securing Chinese and Russian support for tougher U.N. steps.
U.S. officials and U.N. diplomats say the threat of U.S. “secondary sanctions” against Chinese firms with North Korean ties as well as trade pressure helped persuade China, North Korea’s neighbor, ally and main trading partner, to drop opposition to the U.N. sanctions.
The latest steps stopped short of targeting Chinese financial institutions dealing with North Korea, a step that would have greatly angered Beijing. The Trump administration is still hoping China will pressure Pyongyang.
“The sanctions target a range of North Korea’s illicit activities and the focus on Chinese facilitators is another message to Beijing,” said Anthony Ruggiero, a Foundation for Defense of Democracies senior fellow and former U.S. Treasury official.
“However, there are missing elements. There’s no focus on the efforts of Chinese banks that facilitate these transactions. In addition, these Chinese networks likely have additional front companies operating on behalf of the network and those were not sanctioned.”
Another sanctions expert, Joseph DeThomas, said the U.S. move appeared designed to put muscle behind the U.N. sanctions by targeting areas they cover, such as labor and coal exports.
“Sanctioning such entities ex post facto may cause some problems diplomatically, but it will help put a healthy respect for the U.N. resolution in play,” he said.
Richard Nephew of Columbia University said it appeared the U.S. government was “exploring what the tolerance is to the use of secondary sanctions.”
“The fact that they’ve not yet moved forward with any big bank effort suggests to me that they’re quite nervous about the risks of blow-back and reasonably so,” he added.