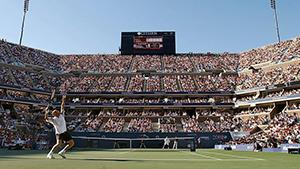 As the US Open’s Arthur Ashe Stadium turns 20, our Andy Schooler looks back on some of its most famous matches.

The US Open’s Arthur Ashe Stadium court is 20 years old this year.

To celebrate that fact and get you in the mood for the 2017 US Open, I’ve taken a look back at some of the most famous matches to have taken place on the 23,000-plus-capacity court.

2011 was the year of Djokovic and he underlined it with a mesmerising display in yet another Monday final in New York. The fact there were some empty seats on Ashe due to the postponement from the scheduled Sunday finish was bordering on criminal, for the tennis served up by the world’s top two players was sensational. Rallies of more than 30 shots were in evidence as the sport’s two best retrievers showed what they were capable of. Djokovic won six straight games to take the opening set and when he went 2-0 up it appeared victory was surely his. Nadal is a player always up for a five-set war though and when Djokovic failed to serve out the third set, he pounced in the tie-break to grab a lifeline. With an ailing Djokovic needing treatment on his back, all of a sudden his opponent looked the favourite but instead he hit the wall as fans witnessed the rare sight of the Spaniard showing signs of fatigue. This time Djokovic took his chance.
Justine Henin-Hardenne beat Jennifer Capriati 4-6 7-5 7-6, semi-final, 2003

A match memorable for its tightness but most of all the fact that the victor ended up on a drip, such were her levels of dehydration. Capriati served for the match twice and on numerous occasions was just two points from victory. Yet a place in the final of her home Grand Slam would continue to elude her. Indeed she would never play in the US Open final. The reason on this occasion was Henin’s dogged determination. Despite her cramping body, the Belgian simply refused to wilt. She had shown what she was all about at the French Open earlier that season and she would make it two Slams in 2003 with her mammoth effort in New York. This was the year that shaped her career; some would say this match did. There were serious concerns that the Belgian would not be able to play the final which began less than 20 hours after this contest finished. Criticism of the schedule naturally followed. Ten years later organisers finally added a day’s rest between the semis and final.

The match of that return. Federer, the only man to have beaten Djokovic in a completed match that season at the time, played superbly for two sets but then went off the boil as his Serbian foe quickly got back into match. A fifth set ensued and Federer rediscovered his form. Moving to match point at 5-3 40-15, Federer made a first serve only to see a sensational forehand return fly back past him, landing just inside the sideline. Having gone for broke, Djokovic raised his hands above his head to milk the applause and smiled wryly. A second match point was duly saved – just as it had been 12 months previously at the very same stage – and a mentally-shot Federer did not win another game.
Pete Sampras beat Andre Agassi, 6-3 6-4 5-7 6-4, final, 2002

Without a tournament victory in two years, Sampras, winner of 13 Grand Slam titles, had reached the point where he simply wasn’t expected to challenge for the top prizes. An ignominious defeat to George Bastl at his second home of Wimbledon a few weeks earlier had appeared to signal the beginning of the end for ‘Pistol Pete’. However, everything fell into place at the US Open. Briton Greg Rusedski actually helped, riling Sampras with some pre-match comments. He duly paid the price as Sampras got his feared serve firing to win a tight contest in the third round. As the confidence began to flow, Sampras pressed on, arriving at the final to face old rival Agassi. The two thirty-somethings produced a classic match of enthralling tennis. Sampras’ serve looked impregnable in the early stages but Agassi found a way into the match in the third set and put Sampras under constant pressure with some fantastic returns in the fourth. However, as in his heyday, Sampras was able to fend off the break points with unreturnable serves as he edged through the set to claim his 14th major. It was to prove the final match of Sampras’ career.

Clijsters’ US Open run of 2009 is the stuff of legend. Playing just the third tournament of her comeback following the birth of her daughter, the Belgian, who needed a wild card just to play in the event, stormed through to the latter stages. A previous-round victory over Serena’s sister Venus saw her produce some superb tennis but many expected the younger sibling to prove too tough a nut to crack in the last four. How wrong they were. Using the stunning off-forehand to full effect, Clijsters rattled her American opponent and the match exploded as it reached a climax. Called for a second-serve foot fault which brought up match point for Clijsters, Williams unleashed a verbal tirade against the line judge. A threat to ‘kill’ the official is disputed but whatever was said, a code violation followed, resulting in the loss of a point – the match was Clijsters’.
Jennifer Capriati beat Serena Williams, 2-6 6-4 6-4, quarter-final, 2004

Few matches can boast as great a legacy as this one. Some dreadful line calls which went against Williams in the final set – including a particular howler of an overrule by umpire Mariana Alves – proved costly for her title hopes but helped usher in the computerised Hawk-eye system. US Open officials were forced to apologise to Williams, although tournament director Jim Curley said such errors were “part of the game”. Not for long. The Hawk-eye technology was already in development but such was the controversy surrounding such a high-profile match between two American greats that the authorities almost had to introduce it. Capriati was the beneficiary on this occasion – although a fat lot of good it did her. For the second year in a row, she would lose her semi-final in a final-set tie-break. She would never get to play in her home Grand Slam final.

Not here for its competitive nature, this match makes the list as it was one of the greatest performances you could ever wish to see in a Grand Slam final. Having taken over at the top of the game earlier that year, Federer demolished a former world number one in ruthless fashion. To win two bagel sets in a major final is virtually unheard of, but so hot was Federer on this day that he left Hewitt beaten, battered and bewildered. At least the second set was competitive, but that’s clutching at straws.