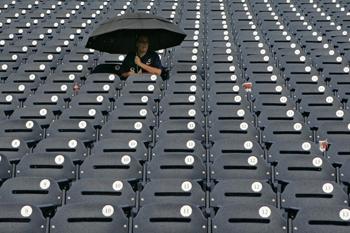 If men are overly concerned with the appearance of impropriety, the careers of female subordinates suffer.
CAROLINE KITCHENER
In March, political chatter erupted over the a fact dredged up by The Washington Post from a 2002 The Hill article: Vice President Michael Pence won’t dine alone with any woman other than his wife, or at least that was the case in 2002. (The Hill article also noted that he will often decline drinks or dinner with solo male colleagues as well, though that was largely lost in the public conversation.)
While some, particularly conservative Christians, commended the practice, saying it showed respect for his marriage, others lamented such a policy means for women more broadly.

Mentoring relationships often solidify outside of work hours—when two people sit together, relax, and get to know each other. If men feel uncomfortable doing that with women, they’re a lot less likely to have female mentees. And as long as men dominate corporate spaces, that puts women at a serious disadvantage.
For The Atlantic’s series, “On the Shoulders of Giants,” I talked with Kim Elsesser, a professor at UCLA who focuses on psychology and gender, and the author of Sex and the Office: Women, Men and the Sex Partition That’s Dividing the Workplace. This interview has been edited for length and clarity.
Caroline Kitchener: How can gender get in the way of mentorship at work?
Kim Elsesser: If a woman asks a male coworker to go out for a beer, the male coworker could wonder, “Is she interested in me? What is my staff going to think if I go out with her? Will I somehow be accused of sexual harassment?” Those issues don’t necessarily come up when coworkers of the same sex go out together. This is problematic because that kind of experience—going out for a beer—is often how mentoring relationships start.
Kitchener: Can you give me a real-life example of how this dynamic might play out?
Elsesser: A boss has season tickets to see a baseball team. He generally invites men from work to join him—not because of discrimination, but because he’s worried about how the invitation would be perceived if he extended it to a woman. So he invites male coworkers to the baseball game, and they discuss work—clients and upcoming projects. The boss hears these male employees’ ideas, and that gives them an advantage in the workplace. As time goes by, he gives them opportunities the women just don’t get.
Kitchener: What are the long-term consequences?
Elsesser: Over time, men get to know other men much better and women get to know other women much better. Men run most of our companies, and therefore they tend to be the most valuable mentors. When a promotion or a new job opportunity comes up, the man chooses the person that he knows slightly better—the person he had that beer with. Over time, this can have major repercussions.
Kitchener: Do you think a lot of people feel uncomfortable hanging out with a coworker of the opposite sex after work hours?
Elsesser: The New York Times recently published a survey that showed that nearly two-thirds of people feel like they need to be extra cautious around the opposite sex. One-quarter think one-on-one work meetings between a man and a woman are inappropriate. If you can’t have one-on-one meetings with someone, that makes it really hard to find a mentor.
Kitchener: Do men feel more uncomfortable spending time with women, or do women feel more uncomfortable spending time with men?
Elsesser: My research shows that men experience more discomfort. They don’t know where the boundaries are, they don’t want to send the wrong message, they don’t want to be accused of sexual harassment. Women sense that discomfort, and they have to work at putting the men at ease.
Kitchener: How can this dynamic be changed?
Elsesser: Organizations need to make this clear to employees: If they only do things with people of the same sex, that is discrimination. Organizations need to emphasize the importance of opposite-sex interactions. They should institute formal mentoring programs that pair women and men together. This would reduce any suspicion of romantic involvement from other people in the office.
Kitchener: Do organizations need to change their sexual harassment policies?
Elsesser: Absolutely. Organizations aren’t really concerned with reducing the amount of sexual harassment. They’re concerned with reducing their legal liability. So they hire lawyers to write their sexual harassment policies. There is no evaluation of the success or the repercussions of these policies. There are some sexual harassment policies that discourage men and women from interacting at all.
Kitchener: Have you looked into how these dynamics change for a LGBT employee? Are men more comfortable inviting a woman to a baseball game if she identifies as LGBT?
Elsesser: Gay men report the same issue that women do. Men are also less likely to invite a gay man to a baseball game. Women report less of an issue with gay men—the gay man would be more likely to invite the woman to the baseball game. I don’t know for sure whether men would be more comfortable inviting a lesbian to a baseball game, but I would assume so.