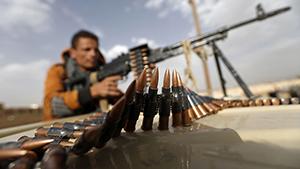 By Mohammed Hatem and Glen Carey
Strains in Yemen’s rebel camp have broken out into the open, possibly spelling an end to an alliance that has fended off a Saudi-led coalition’s attempt to seize control of the war-ravaged country.

Shiite Houthi rebels have accused former Yemen President Ali Abdullah Saleh, whose loyalists joined forces with them, of holding secret talks with the United Arab Emirates, a close Saudi ally and member of the coalition. The Houthis say Saleh — who denies the charge — crossed “red lines” and denounced his description of them as a militia, a term the Saudis use to challenge their legitimacy.
Escalating violence could drive Yemen, a precarious nation only reunited in 1990, to completely disintegrate, becoming a failed state perched south of the world’s biggest oil exporter and a major maritime artery. The unusually public rift in the rebel camp threatens to crack open further Thursday at a rally in support of the still-powerful Saleh in the capital, Sana’a.
The collapse of the Houthi-Saleh alliance could lead “to an open-ended war of all against all,” Abdulbari Taher, an independent analyst based in the capital, said by telephone. “The Saudi-led coalition would benefit from any conflict between Saleh and Houthis but this would cause a human catastrophe in Sana’a.”
Divided Land
In a televised speech on Wednesday, Saleh rebuked the Houthis for calling his party traitors and urged them to “hold back your crazy people.” He also appealed for calm among his supporters and said the rally was meant to propel the United Nations Security Council to issue a resolution on ending the war.
For the past two years, Saudi Arabia’s southern neighbor has been divided into two camps, with the government of the ousted Saudi-backed elected president, Abdurabu Mansur Hadi, encamped in Aden and the Iran-backed Houthis in control of Sana’a and much of the north. The Saudi-led coalition that formed in 2015 to try to reinstate Hadi has devastated swaths of the country with airstrikes, and al-Qaeda militants have exploited the chaos to expand their foothold in the Arabian Peninsula.
U.A.E. Minister of State for Foreign Affairs Anwar Gargash’s call on Wednesday for Saleh and his General People’s Congress to sever their ties with the Houthis is likely to only widen Yemen’s divisions.
The General People’s Congress has a “historic choice” and should decide “to withdraw from the rebellion” at the rally in the Yemeni capital on Thursday, Gargash wrote on Twitter. A decision to break with the Shiite rebels would “be for the future of Yemen,” he said.
Fragile Alliance
The alliance was a marriage of convenience between the rebels and Saleh, who was toppled in 2012 in the Arab Spring uprisings, but as president warred multiple times with the Houthis. He had held power since Yemen’s unification.
The Saudi-led coalition “has been trying to break the alliance for three years,” Majed al-Madhaji, the executive director of the Sana’a Center of Strategic Studies, said by phone. “The Hadi government and his supporters have been ineffective. There is no other choice but for them to deal with Saleh.”
The former president’s support for the Houthis has helped to prevent a decisive victory by Saudi Arabia in what is seen as a proxy war against arch-rival Iran. The fighting has unleashed widespread carnage and a humanitarian disaster unnoticed by much of the world as the war dragged on.
While Sana’a has been spared much of the fighting, the rest of the country of 27 million people has not. Nearly 7 million are facing the threat of famine and 16 million lack access to water, UN humanitarian affairs chief Stephen O’Brien said in an Aug. 18 statement.
Thousands of Saleh backers have started to gather in the al-Sasbeen squre in Sana’a where the rally will be held, residents said. Pictures of the former leader and his son Ahmed, a former commander of the Republican Guard, have been placed on cars, motorcycles and buildings. Loudspeakers are playing anthems to Saleh and his party, they said.
The Houthis have set up more checkpoints around the city ahead of the protest after calling for a state of emergency on Tuesday “to confront the aggression and traitors.”