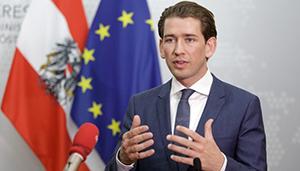 Speaking to Germany’s Die Welt, Kurz said Erdoğan’s treatment of the opposition and minorities is “not acceptable.”

Underlining that “Erdoğan shows dictatorial characteristics,” the Austrian foreign minister said the Turkish president has been dragging his country in a “wrong and dangerous” direction.”

Kurz stated that under the current circumstances he is against the expansion of the customs union between a Turkey “which systematically violates human rights and basic democratic values” and the European Union.

German Chancellor Angela Merkel said last week that the EU cannot continue expanding the customs union with Turkey unless tensions with Turkey ease and underlined that there would be “no kind of deepening at all” in Turkey-EU ties.

Turkish Minister for European Union Affairs Ömer Çelik said on Thursday that remarks made by Merkel were unfortunate.