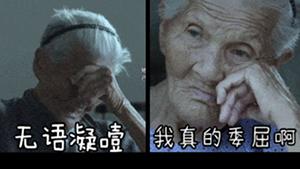 By Kerry Allen BBC Monitoring
Chinese users of the popular social network QZone are furious after stickers, or memes, that seem to poke fun at World War Two “comfort women” emerged on the platform.

The stickers on the Tencent-owned platform featured images of elderly women from Twenty-Two, a recent TV documentary about women who were kidnapped and forced to work as sex slaves for the Japanese military.
They had captions such as “Speechless and choked up” and “At a loss”, and were apparently intended to be humorous.
QZone has apologised for the offence caused by the images, which have now been removed, and says it is investigating.
Estimates suggest up to 200,000 women from South East Asia were forced into sex slavery for Japanese soldiers during World War Two, many of them Korean.
Not ‘entertainment’
QZone users noticed the stickers appearing around 20 August, a week after Twenty-Two was aired to coincide with the annual International Memorial Day for Comfort Women on 14 August.
Thousands took to the popular Sina Weibo microblog to vent their fury, with some calling for a boycott of Tencent mobile applications.
“What brutes produced these stickers?” asked ‘OhThisBrainA’. “How would you feel if this was a member of your family? If it was your mother?”
“The people who made these stickers are heartless, using other people’s pain for their own entertainment,” another user added.
“There are some things that should remain a serious issue, and that’s the bottom line, I don’t know what those packaging these images as stickers were thinking,” said one user, receiving more than 18,000 likes.
“I hope they [Tencent] issue a serious apology. This kind of thing is not ‘entertainment’. Absolutely not,” added ‘Cherry_Tiffany’.
‘Deeply sorry’
Following the online outcry, QZone pulled the images from its platform.
It issued a statement on 21 August saying: “We are deeply sorry for the impact this incident has had,” and said that it would carry out an investigation.
It said that the images were “provided by a third-party”.
“We have learnt a lesson and will resolutely ensure that such an incident does not happen again,” it said.
But many social media users appeared dissatisfied with the explanation.
“This third party has magically appeared,” said ‘QinYouDuZhong’ in a post liked by over 1,500 users.
Some users even went as far as to suggest that this was Tencent’s own government “propaganda” to plug the show.
State media have been heavily promoting Twenty Two over the past week, and have highlighted the endorsements it has received from Chinese celebrities.
According to Global Times, the film grossed 3.5m yuan ($524,000; £409,000) at the box office on the first day of its release.
Government media often highlight the involvement of China’s “comfort women” in World War Two around the 15 August, which marks the anniversary of Japan’s surrender in the conflict.
There are 14 known “comfort women” still alive today in mainland China.
BBC Monitoring reports and analyses news from TV, radio, web and print media around the world. You can follow BBC Monitoring on Twitterand Facebook.