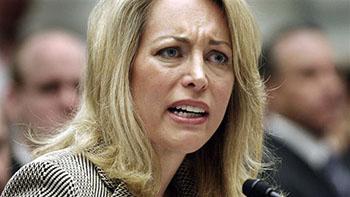 Valerie Plame Wilson, a former CIA operations officer, is trying to buy Twitter so she can ban US President Donald Trump from the social media site.
She has launched a campaign to raise money to buy a controlling interest in the social media site in order shut down Trump’s Twitter account.

“Twitter is a publicly traded company. Shares [equal] power,” her page on the crowd funding website “GoFundMe” reads. “This GoFundMe will fund the purchase of a controlling interest in Twitter.”
Wilson, whose cover was blown in a leak during the George W. Bush administration, has said she needs more than $1 billion to purchase a controlling share of the social media giant. The company is currently worth nearly $12 billion, with its shares going for around $16.
“But that’s a small price to pay to take away Trump’s most powerful megaphone and prevent a horrific nuclear war,” Wilson says on the page.
“Donald Trump has done a lot of horrible things on Twitter,” the 54-year-old says.
“From emboldening white supremacists to promoting violence against journalists, his tweets damage the country and put people in harm’s way,” she says.
“The bad news is Twitter has ignored growing calls to enforce their own community standards and delete Trump’s account. The good news is we can make that decision for them,” she argues.
Wilson has said that if she cannot raise the $1 billion required to ban Trump, she will purchase a “significant stake” that would allow her to push for the deletion of the president’s account. She has so far raised about $50,000.
Trump has come under increasing pressure over his stance on the racial violence, with many members of his own Republican Party and US business executives distancing themselves from him.
The outspoken Republican president has also threatened to launch a pre-emptive nuclear strike against North Korea in order to damage the country’s nuclear program. In response,
In response to Trump’s dire warnings, North Korea said it was “carefully examining” a plan to strike the American Pacific territory of Guam with missiles.
The North Korean military said it could carry out a pre-emptive strike if there were signs of an American provocation.