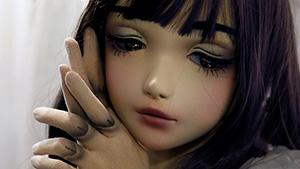 The effect is a little unnerving: Lulu Hashimoto looks like a doll but moves like a human.

Created by Hitomi Komaki, she is the world’s first living doll, and she has mesmerised thousands of fans who follow her on Twitter and Instagram, and who turn out on the streets in the hope a catching a glimpse of her.

She is a human being who is fully clad in a doll costume, consisting of wig, mask, and stockings patterned with doll-like joints. The identity of the dancers, designers and models who wear the costume is a closely-guarded secret.

Lulu was born out of Komaki’s desire to create an “epitome of cuteness”.