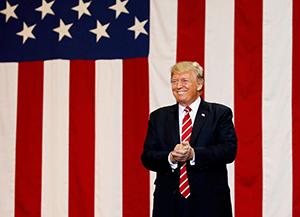 Gabriel Stargardter and David Ljunggren
MEXICO CITY/OTTAWA (Reuters) – Mexico and Canada on Wednesday dismissed U.S. President Donald Trump’s latest threat to scrap NAFTA, describing it as a negotiating tactic aimed at winning the upper hand in talks to update one of the world’s biggest trading blocs.

At a campaign-style rally in Arizona on Tuesday night, Trump cast doubt on any deal to improve the North American Free Trade Agreement and said “we’ll end up probably terminating NAFTA at some point.”
Initial talks between Mexico, the United States and Canada to update NAFTA ended in Washington over the weekend amid signs of deep division on key issues. Further discussions are due to start in Mexico City on Sept. 1.
Trump has long called the 1994 treaty a bad deal that hurt American workers, saying it should be renegotiated or ended.
Trump’s top trade official, Robert Lighthizer, underscored the NAFTA termination threat on Wednesday, saying the United States was seeking “substantial changes to address its fundamental failures.”
“President Trump has been clear from the very beginning that if the NAFTA renegotiation is unsuccessful, he will withdraw from the agreement,” Lighthizer said in a statement issued by
the Office of the United States Trade Representative.
Mexico’s Foreign Minister Luis Videgaray announces the dual year 2017-2018 between Mexico and Colombia, during a news conference in Mexico City, Mexico July 18, 2017.Carlos Jasso
Trump’s comments initially pushed Mexico’s peso currency down more than 1 percent but it later recovered its losses. The peso has been sensitive to Trump’s anti-NAFTA rhetoric, touching record lows shortly after his election in November 2016 on fears that he would raise tariffs on Mexican goods.
Mexican Foreign Minister Luis Videgaray sought to brush off Trump’s threat, saying the comments would not scare Mexico in the negotiations.
“He’s negotiating in his own particular style,” he told Mexican television.
Mexican Economy Minister Ildefonso Guajardo added in a statement that Mexico has a “Plan B very clearly defined” in case NAFTA talks fail, but declined to provide details.
Canadian Prime Minister Justin Trudeau, speaking to reporters in Montreal, said his officials would “stay focused on the hard work we have ahead of us at the negotiating table … I don’t see anything changing in that.”
He did not directly refer to Trump’s remarks.
A Canadian official earlier said the government had been bracing for moments of turbulence.
“This was always a card we knew the president would likely play … it may have been a bit earlier than expected,” said the official, who declined to be identified given the sensitivity of the situation.
Additional reporting by Veronica Gomez in Mexico City and David Lawder in Washington; Editing by Frances Kerry and Tom Brown