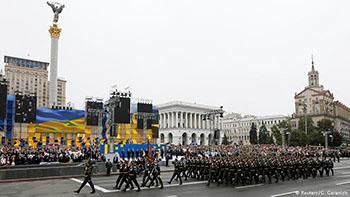 In a DW interview, Barbora Maronkova of the NATO Information Centre in Kyiv discusses the participation of alliance troops in the Independence Day parade in Ukraine, and the growing support for NATO in the region.
DW: On Thursday Ukraine will be celebrating the 26th anniversary of its independence. For the first time, troops from NATO countries will be participating in a military parade in Kyiv. The second new development is that defense ministers from several NATO countries will be attending, including James Mattis from the US. Why now?

Barbora Maronkova: To be honest, I can’t answer why NATO countries are taking part this year in particular. But we are very pleased, because we also celebrated another event this year, which was the 20th anniversary of the NATO-Ukraine distinctive partnership [the Charter was signed in July 1997 – ed.]. And we have been working very hard to help Ukraine modernize its armed forces, meet NATO standards and achieve interoperability. In that sense, the participation of military colleagues from both NATO allies and partner countries is a symbolic example of a strong partnership between NATO and Ukraine.
The US is a key country for NATO. During the previous administration of Barack Obama, the impression was given that Washington didn’t want to provoke Russia by visiting Ukraine. Obama never visited Kyiv, his defense secretary never participated in the Independence Day parade. This year there are several NATO ministers attending the parade, which might be interpreted by Russia as a provocation. Does this mean that NATO no longer cares about Russia’s reaction?
For us, what is important is that NATO partner countries are independent and sovereign nations. If they want to have a military parade with colleagues from other countries, or if they participate in NATO’s military training and exercises, it is their sovereign decision. Ukraine has been participating in NATO’s military exercises for the last few years, and many NATO countries have participated in exercises in Ukraine. For example, every year we have a naval exercise called “Sea Breeze.”
Do you think that this large NATO presence on Independence Day in Kyiv has something to do with Donald Trump’s new administration trying to take a different course?
I wouldn’t want to speculate on what the US administration is doing. Of course, US Defense Secretary Mattis’ visit to Kyiv is important, as was the visit by the Secretary of State in July. We are happy that various NATO allies are bilaterally supporting Ukraine, just as NATO is providing strong support.
NATO has intensified its support for Ukraine since the Russian annexation of Crimea 2014. What are the results so far?
We have to look at the overall package of reforms that Ukraine has been undertaking since 2014. Any expert would agree that the pace and intensity of reforms in the past three years were unprecedented. NATO is focusing on defense, security, modernization and standardization. It’s a wide range including logistics, defense procurement, command structures and training. We see progress in some areas more than in others. But we also have the knowledge that such reforms are very difficult and painful under normal circumstances, let alone in a country like Ukraine. It is facing an aggressive neighbor and part of its territory has been illegally annexed. There are separatists in the east of Ukraine, it is facing hybrid warfare and cyberattacks. NATO offers assistance on a daily basis.
What are beacon projects from NATO’s point of view?
One of the issues that has achieved good results, according to our advisors, has been improving command structures and communication. There has been some good cooperation in the area of cyber defense. We also launched some very impressive projects in the area of medical rehabilitation and are now working together with our Ukrainian partners on psychological rehabilitation, which is a big issue.
NATO does not want to get involved in a military conflict between Russia and Ukraine. How difficult is it against this background for NATO to help Ukraine?
I don’t feel or see any difficulties. We have a team of nearly 50 people working here as advisors in various formats. There are many other advisors who are directly embedded in various ministries and institutions on a bilateral basis. We talk regularly with Ukrainian citizens, journalists and parliamentarians. I see a positive reaction to our support here.
Support for NATO within the Ukrainian population has grown in recent years. Polls put it at 43 to 55 percent, some even higher. What is your experience?
The increased support is obviously a result of the security situation in Ukraine. It is, however, very useful to our work. It allows us to go out more and engage with people, and openly discuss what NATO is and what it is not. There are many Cold War stereotypes that are still prevalent in Ukraine.
Barbora Maronkova is the director of the NATO Information and Documentation Center in Kyiv, Ukraine.
The interview was conducted by Roman Goncharenko.