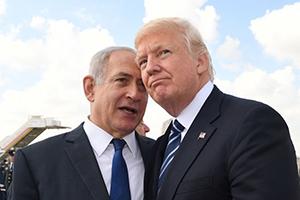 Trump’s policy has focused on eliminating Islamic State. But Netanyahu had a bigger concern.
by Eli Lake

Trump’s Syria policy has focused on eliminating the Islamic State. But for Israel, the greatest threat was from Iran, whose allies and forces showed no signs of leaving. Tillerson’s ceasefire made no mention of the need for Iran and its proxies to get out of Syria. Israel understandably wondered: Was that arrangement a sign of Trump’s broader Middle East policy?

Evidently not. Last Thursday, a senior delegation of Israelis started consultations with their U.S. counterparts to begin planning a wider strategy to pressure Iran, Hezbollah and other Shiite militias to leave the Levant as, they hope, the war in Syria peters out.

One senior National Security Council official told me the plan was to make it “less pleasant for Iran to stay than to leave.” A senior Israeli official confirmed that the two sides agreed to work together on a regional strategy to address Iran’s efforts to expand its presence in Syria and Lebanon.

There are a few reasons why all of this is important. To start, it shows a continuing commitment to an initial project of McMaster’s predecessor, Mike Flynn: to drive a wedge between Iran and Russia.

Netanyahu, Cohen and other senior officials will meet with Russian President Vladimir Putin Wednesday, and Syria will be on the agenda. Israel does not love Russia’s military involvement in Syria, but can tolerate it. Iran is a different story. Russia, unlike Iran, has not anchored its state ideology in the destruction of the world’s only Jewish state.

Trump’s team has also pursued cooperation with Russia in Syria, but has not sought such cooperation with Iran. Indeed, a U.S. spokesman for the coalition to defeat the Islamic State this week told Reuters the mission was to “defeat ISIS in designated areas of Iraq and Syria and to set conditions for follow-on operations to increase regional stability.”

As the Israeli official told me this week, it was important to Netanyahu’s government to make sure that the Russian-U.S. cooperation in Syria did not entail acceptance of a permanent Iranian presence in Syria. Tillerson’s ceasefire could have opened the door to just that.

The consultations also indicate that McMaster has rebounded from his shaky start in the job. With the removal of his West Wing rival, Steve Bannon, McMaster now has a freer hand to coordinate U.S. foreign policy from his perch at the National Security Council. The meeting last week with the Israelis helped smooth an important ally’s ruffled feathers.

The meeting also counters a narrative put out by McMaster’s adversaries in Washington that he is hostile to Israel. The Israeli official told me that he was particularly generous with his time, inviting the delegation to his home for dinner and impressing on the Israelis the importance the president places on countering Iranian influence in the Middle East.

Both Israeli and U.S. officials tell me they expect more working-level follow-ups on the consultations. One factor that is likely to be part of the U.S. strategy in Syria will be empowering both Egypt and Jordan to play a greater role in building on the ceasefires negotiated by Russia, Iran, Turkey and the U.S. As Ha’aretz Middle East analyst Zvi Bar’el wrote Monday, Egypt is already conducting its diplomacy between rebel militias and the Syrian regime. That’s reassuring to Israel because Egypt too considers Iran to be a major threat to regional stability.

Including Israel in the U.S. planning on countering Iran is also a change from the Obama administration. During the Iran nuclear talks, the Israelis were briefed on the status of the negotiations, but were not at the table to influence the eventual agreement, which both Netanyahu as well as his political rivals opposed. The tensions during this period soured the U.S.-Israel relationship, especially after the Obama White House accused Israel of trying to spy on the talks and then brief Congress on them.

The world has been watching for signs of how Trump would navigate the Middle East. Last week’s talks in Washington show that Trump is taking a different approach with Netanyahu than Obama did, and is getting a different response.