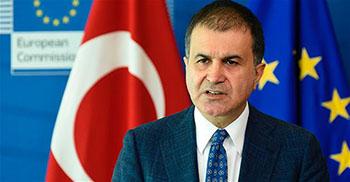 Turkey’s European Union Minister Ömer Çelik accused German Foreign Minister Sigmar Gabriel on Aug. 23 of “copying the far-right and racists” through his statements in the ongoing diplomatic row between Ankara and Berlin.

“Gabriel is not making original statements. He speaks by simply copying from the far-right and racists,” Çelik wrote on Twitter in a 29-post chain, criticizing Gabriel and Austrian Foreign Minister Sebastian Kurz.

He said attacks by “racists, fascists and enemies of Islam” against Turkey or President Recep Tayyip Erdoğan meant “nothing” to Ankara.

The Turkish minister accused Gabriel of trying to “sabotage” Turkey-EU relations and “giving racists a message of ‘you’re right.’”

“Attacks on our values by the enemies of humanity are a source of pride for us. They show that we are keeping our values alive,” Çelik said.

“This debate is not about us. It is between those who are enemies of fundamental values and those competing with them, speaking in a ‘copy-paste’ method,” he added.

On Aug. 18, Erdoğan called on Turkish-origin German citizens to not vote for Merkel’s Christian Democrats, Martin Schulz’s Social Democrat Party (SDP) or the Green Party in the upcoming elections, as he said they were the “enemies of Turkey.” He later hit out at Gabriel personally, saying “know your limits” and asking “how old are you?”

Merkel described his words on Aug. 20 as “absolutely unacceptable.”

Gabriel said on Aug. 21 that Berlin and the rest of Europe should support the “democratically minded” majority of Turks who do not back Erdoğan. He also accused supporters of the Turkish president of threating his wife, saying the personal nature of Erdoğan’s attacks on him had emboldened people to make threats against his wife at the dental surgery where she worked.

“Erdoğan’s approach clearly motivates some people to try to threaten and harass my wife. Of course, this is a terrible outcome,” he said, without giving further details.

Austria, like Germany, was previously locked in an angry spat with Ankara.

Kurz also condemned on Aug. 20 “the constant interference by Erdoğan in the internal affairs of other states,” suggesting that Germany was not the only country where Turkey interfered.

Turkey has repeatedly claimed that Germany is “sheltering” members of the outlawed Kurdistan Workers’ Party (PKK) and wanted coup plotters.