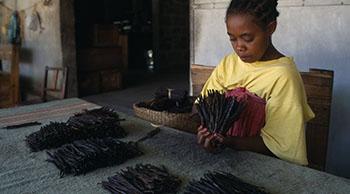 The price of vanilla, Madagascar’s largest export, has risen in recent months after storm damage and growing demand for the natural extract squeezed the market.
Since 2015 the price of the spice has soared from $100 per kilogram to “a never-before-seen peak of between $600 and $750 a kilo,” according to Georges Geeraerts, president of Madagascar’s Group of Vanilla Exporters.

The Indian Ocean island accounts for about 80 percent of global vanilla production, and trade remains largely unregulated.
Demand for one of the world’s most popular flavors eventually outstripped supply of around 1,800 tons per year.
The shortage intensified after tropical cyclone Enawo hit Madagascar earlier this year destroying a third of the island’s crops.
Skyrocketing prices have made vanilla unaffordable for confectionery companies. Some high-end ice cream companies have had to pull the flavor from the menu.
In Boston, an ice cream shop owner told the Boston Globe that shortly after the storm the price for vacuum-packed bags of vanilla beans had jumped 344 percent to $320 per pound.
In London, the Oddono gelato chain had to remove its vanilla ice cream off the menu, telling customers it would be back after the 2017 vanilla harvest became available.
Meanwhile, the sudden cash bonanza has threatened to fuel crime across Madagascar.
Markets in the vanilla-producing Sava region were flooded almost overnight with motorbikes, smartphones, solar panels, generators, flat-screen televisions and gaudy home furnishings.
“Money no longer has any meaning, people think it’s a free-for-all, it’s becoming anarchy,” vanilla grower Vittorio John told AFP.
Theft cases from vanilla plantations have become more frequent, forcing some farmers to sleep in the fields and guard their precious crop. According to media reports, several thieves have been beaten, imprisoned or even killed.
Vanilla is widely used in chocolate, cakes, and drinks, as well as ice cream, aromatherapy, and perfume. It is one of the most labor-intensive foods on Earth. Vanilla beans are the seeds of an orchid, and each one must be fertilized by hand.