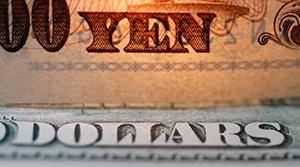 TOKYO (Reuters) – The dollar was buoyant against the yen on Friday as some participants bought back the currency to square positions ahead of a meeting of central bankers in Jackson Hole, Wyoming.

While Federal Reserve Chair Janet Yellen and European Central Bank President Mario Draghi are expected to stay on script in speeches later in the day, investors are hungry for any clues on further U.S. rates rises, the timing of its balance sheet tapering and if Europe is still looking to rein in stimulus.

The greenback was poised to end 0.3 percent higher against the yen on the week, during which it had slipped to as low as 108.635 yen on geopolitical tensions stemming from the Korean Peninsula.

Investors’ focus for the time being has shifted from geopolitics and political turmoil in Washington to monetary policy.

“The theme at Jackson Hole this year is ’fostering a dynamic global economy’ and as such a general title suggests, the market may not get the immediate hints on interest rates it is eager to hear,” said Yukio Ishizuki, senior currency strategist at Daiwa Securities.

But as a precaution some speculators appeared to have bought back the dollar before Jackson Hole, resulting in the dollar/yen’s rise, Ishizuki said.

Price data from Japan highlighted what could be a major topic of discussion at the central bankers’ gathering: why are inflationary pressures remaining so stubbornly weak despite a seemingly synchronized global economic recovery?

Japan’s core consumer prices inched up for a seventh straight month in July from a year earlier, but the gain was a tepid 0.5 percent and driven largely by higher fuel bills. The yen showed little reaction.

The common currency awaited ECB Draghi’s speech, though most market watchers expect he will drop few hints before the bank’s next policy review on Sept 7, when some expect he will announce plans to start reducing stimulus.

The euro has gained nearly 14 percent against the dollar this year and some observers were focusing on whether Draghi would choose to talk down the currency’s strength.

The dollar index against a basket of six major currencies stood unchanged at 93.296 .DXY after nudging up 0.15 percent overnight on the back of a rise in U.S. Treasury yields.