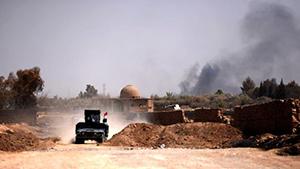 By Joan Soley BBC News
Tal Afar, about 55km (35 miles) to the west of Mosul, was always going to be next on the “to do” list for Iraqi forces.

Just as the fighting for Mosul moved from east to west over the course of many months, the Iraqi military is now moving westwards towards the Syrian border.
Although much smaller in size, Tal Afar has been a so-called Islamic State (IS) stronghold that the jihadist group has used as a strategic “base” since 2014.
And Tal Afar has had ruthless rulers before – between late 2004 and early 2006, the city was controlled by al-Qaeda in Iraq, a precursor to IS.
Before it fell to IS, the city’s population of 200,000 was predominantly ethnic Turkmen, a Turkic people who have their own language and customs. The majority were also Sunni Muslims.
Image copyright US Army via Getty Images Image caption US forces lost control of Tal Afar to al-Qaeda in the years after the 2003 invasion of Iraq
Tal Afar’s residents are not viewed as helpless victims by many in the region; for a relatively small population, security sources say a disproportionate number of men from the city filled the ranks of IS as commanders, judges and members of their vicious religious police.
The battle for Tal Afar could also escalate tensions between Iraq, its ethnic Kurdish minority, Turkey and Syria.
Turkey refuses to close or move its military base near Mosul, claiming it could be needed to protect Iraqi Turkmen as well as the Turkish border. The mere idea of Turkish military action on Iraqi soil has been enough to cause many, from Washington to Baghdad, to lose sleep.
Kurdish leaders in Irbil are also keeping their eyes wide open as well – juggling the real or perceived threats from Sunni Arab insurgents, Turkish forces and an ever-growing number of Shia Arab militiamen.
Tal Afar is a two hour drive from the Turkish border, and the main road from Mosul to Syria runs through the city. It is, in many ways, the perfect location – and the right time – for a perfect storm.
The military assault on Tal Afar might seem clear cut, but the combination of forces involved invites complications on the ground.
Approximately 40,000 troops are taking part in the fighting – three Iraqi Army divisions, Iraqi and US-led coalition special forces personnel, as well as “government-backed” paramilitary fighters from the Popular Mobilisation (Hashd al-Shaabi).
The Popular Mobilisation is an umbrella organisation under whose banner are militias like Kataib Hezbollah (Hezbollah Brigades), Moqtada al-Sadr’s Saraya al-Salam – the current incarnation of the Mehdi Army – and the Badr Organisation.
The Popular Mobilisation’s ranks also include fighters from Asaib Ahl al-Haq, a group trained by the Iranian Revolutionary Guards’ Quds Force that has been accused of a number of kidnappings and attacks in Iraq.
The factions in the Popular Mobilisation are predominantly Shia and many are backed and funded by Iran. When you speak to them, many of their fighters do not try to hide their deep-seated disdain for Iraqi’s Sunni population.
Regardless of fears, internally and internationally, about the size and ultimate intentions of the Popular Mobilisation, it is not going away any time soon. It is needed, many argue.
Once Tal Afar has been recaptured, this menagerie of forces will face a tougher operation on a wider scale that could last for months.
A case can be made that the number of ground troops available to take part in it will be as important as their weaponry and air support.
About 290km (180 miles) south-west of Mosul, IS also holds a string of towns along the Iraqi part of the River Euphrates in Anbar province.
These villages are known collectively as “al-Qaim”, and they are connected by the Euphrates to the last IS stronghold in Syria – Deir al-Zour province.
Deir al-Zour is now the heart of the “caliphate” proclaimed by IS three years ago.
Accurate figures are hard to come by, but there are an estimated 15,000 to 20,000 IS fighters on the Iraqi and Syrian sides of the Euphrates valley.
Simply pushing the IS extremists over the Syrian border from Iraq will not be enough – and is likely to add to the problem of IS in Syria – but there is little more than inaudible rumblings about how Iraqi forces will maintain security once they have retaken al-Qaim.
One solution may be to leave the Popular Mobilisation in the area as a substitute police force, because it has enough manpower and will need a new task, and also because Iraqi Prime Minister Haider al-Abadi has spoken out against disbanding them.
In this scenario, Iraqi border security would be handled by forces that are heavily involved with Iran, yet backed by the government in Baghdad – which in turn, is backed by the US government and other powers.
Iraqi regular forces, as they work their way back to Baghdad, will have another problem to deal with; a large pocket of IS territory in the middle of the country that has been contained primarily for three years by Kurdish Peshmerga forces.
The fight for the city of Hawija may be as deadly as any so far, as it is a cut-off viper’s nest. The IS fighters holding it truly have nowhere to run, should they try.
The minute the smoke clears from Hawija, the Iraqi military will be looking across the battlefield at the Peshmerga.
They distrust each other with equal fervour, and the only thing they have agreed on is need to the defeat IS.