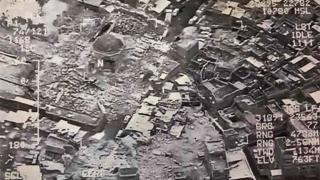 The operation in Tal Afar is ongoing for less than a week yet, but according to some estimates over 10,000 local civilians have already been displaced since its start. Those who managed to flee the battlefield have to walk for hours in the hope of reaching safety.

On August 20, the Iraqi military launched an operation to recapture the city of Tal Afar, some 60 kilometers west of Mosul, from Islamic State (IS, formerly ISIS\ISIL) terrorists, who have controlled it since June 2014.
In the first four days of the offensive, the Iraqi military backed by the US-led coalition killed about 300 terrorists and destroyed 35 tunnels as well as 15 ISIS positions, according to Brigadier General Yahya Rasool, the Iraqi Joint Operations Command spokesman, as cited by news outlet Rudaw.
Since the beginning of the operation, more than 14,000 people have fled Tal Afar, while the total number of people who have escaped from the area since April is over 30,000, according to the Norwegian Refugee Council (NRC), which is present there providing aid.

Some 40,000 civilians are still trapped in the city and its neighboring areas, according to the NRC. The US-led coalition gives another estimate, saying that between 10,000 and 50,000 civilians remain in and around Tal Afar.
Civilians are “being used as human shields by ISIS, risk being killed in a coalition airstrike or make a run for it, brave the crossfire, the desert and the merciless heat in the hope that you get out,” RT’s Murad Gazdiev says, reporting from Iraq.
Sara Alzawqari, from the International Committee of the Red Cross in Iraq, told RT that civilians flee at night while being shot at.
“We fear that Iraqi civilians are likely to be held as human shields again and that attempts to flee could result in executions or shootings,” Andrej Mahecic, spokesperson for the Office of the UN High Commissioner for Refugees (UNHCR) said at a press conference in Geneva on Tuesday.
“We are preparing for thousands more to flee in the coming days and weeks. Conditions are very tough in the city. Food and water are running out, and people lack the basic necessities to survive,” Lise Grande, the UN Humanitarian Coordinator for Iraq, said on Sunday. “Families are trekking for 10 to 20 hours in extreme heat to reach mustering points. They are arriving exhausted and dehydrated.”
Refugees walk for hours to reach safety, exhausted, with minimal amount of clothes
Most people displaced from Tal Afar have to walk for hours “in arduous conditions before reaching safe areas,” and many arrive “exhausted and in poor health, often with critical levels of malnutrition among children, some unable to move,” the UN Migration Agency, IOM, reported on Tuesday. The people who flee carry a minimal amount of clothes, some only had what they wore, and some were only partially clothed, it added.
IOM said that those who fled from the area arrive at military checkpoints and mustering points, and are then transported by the local authorities to areas including Hammam al-Alil, an area south of Mosul in the Nineveh Governorate which hosts a displacement camp. Froom there, they are transported to other displacement camps and emergency sites.
Some refugees report “walking up to 20 hours before reaching Badoush, a point at which the authorities provide onward transport,” including to Hammam al-Alil, NRC reports.
“To get through those checkpoints, you need documentation. If you don’t have it or you have the wrong kind of documentation, you are prevented from moving further on,” Melany Markham, Norwegian Refugee Council’s (NRC) media coordinator in Iraq, told RT.
Heidi Diedrich, Country Director for NRC in Iraq, says it is critical “that the barriers civilians are now facing on their freedom of movement are immediately lifted, so that they can move onward to camps and communities of their choice.”
UNHCR’s Representative in Iraq, Bruno Geddo, told RT about the three-day journey of a woman with two children and the horrific conditions they have suffered.
“This woman told us that she had been walking for three days, she had been sleeping in shepherds’ huts. Her husband was killed by sniper fire some time back and she saw dead bodies from sniper fire and landmines,” Geddo said.
“All the way, she was in a deep state of shock and trauma. She said she had been surviving on dirty water and bread for three months.”
RT’s Ruptly video news agency has released footage of refugees from Tal Afar who are living at the so-called “Western Axis Camp” located west of the city. The camp accommodates more than 1,500 families, Ruptly reports.
The refugees said the camp lacks necessary supplies.
“We are hungry. We need bread, aid. We need clothes, water. Yesterday we got contaminated water, even animals won’t drink it. We are living in tough times. No authorities are checking how we are doing. No mercy. We need a solution. We are in such a bad state. Everything is scarce. Even bread,” said Tal Afar refugee Ghaz Ghashman Hassan.
Another one, Abu Abdallah, said they are demanding that the authorities deal with the shortage of medicines.
“The nearest access would be 100 kilometers away, and doctors there may or may not come,” he added.
Parallels have been drawn between the battle for Tal Afar and the operation to retake Mosul, located just 80 kilometers to the east. Thousands of civilians were killed there both at the hands of IS terrorists and the relentless coalition airstrikes, with the exact extent of casualties still not publicly known.
“The people in Tal Afar would face similar consequences to what the people in Mosul have suffered from lack of food, lack of water, the necessities. The battle of course is going to get even more intense,” Sarah Al-Zawqari of the Red Cross in Iraq told RT. “The people who are fleeing already took a risk… many of them fled at night while being shot at.”