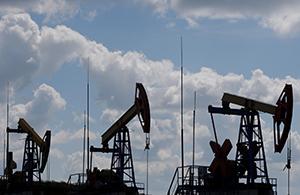 SINGAPORE (Reuters) – Oil prices rose on Friday as the U.S. petroleum industry prepared for potential output disruptions as Hurricane Harvey headed for the heart of the nation’s oil industry in the Gulf of Mexico.

The storm has rapidly intensified since Thursday, spinning into potentially the biggest hurricane to hit the U.S. mainland in 12 years and taking aim between Houston and Corpus Christi on the coast of Texas.

International Brent crude futures LCOc1 were at $52.39 per barrel, up 35 cents, or 0.7 percent, from their last close.

Prices rose as production in the affected area shut down in preparation for the hurricane, and on expectations that closures could last if the storm causes extensive damage.

“Damage and flooding to refineries and shale fields, disrupted production in the Gulf of Mexico and infrastructure damage are unlikely to be bearish for WTI,” said Jeffrey Halley, senior market analyst at futures brokerage OANDA.

U.S. gasoline prices RBc1 have shot up by almost 10 percent since Wednesday to $1.73 per gallon, their highest level since April as refiners also shut down in preparation to the storm.

Beyond the storm’s potential impact on the oil industry, crude remains in ample supply globally despite efforts led by the Organization of the Petroleum Exporting Countries (OPEC) to hold back production in order to prop up prices.

OPEC, together with other producers including Russia, has pledged to cut output by around 1.8 million barrels per day (bpd) this year and during the first quarter of 2018.

However, not all producers have lived up to their pledges and supplies remain high, resulting in ongoing low prices.

A joint OPEC, non-OPEC monitoring ministerial committee said on Thursday that an extension to the supply-cut pact beyond March was possible, though not yet decided.

Because of soaring U.S. output, the discount of WTI crude to Brent on Friday rose to its widest in almost two-years at 4.69 per barrel. CL-LCO1=R

Deeply discounted WTI makes U.S. crude exports attractive, and Thomson Reuters Eikon data shows shipments to Asia hit a record of over 300,000 bpd during the first half of the year.