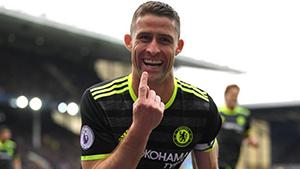 Gary Cahill to Juventus is one of the rumours to check out in Friday’s edition of Paper Talk.

Juventus have contacted Chelsea about a deal for Gary Cahill.

Watford have completed the loan signing of Peru winger Andre Carrillo from Benfica.

Chelsea target Alex Oxlade-Chamberlain will reject the offer of a new contract from Arsenal.

Hull are close to landing Watford’s Isaac Success to kick-start a busy final week of the transfer window.
DAILY MIRROR

Arsenal are facing the prospect of having to sell Alex Oxlade-Chamberlain before the end of the summer transfer window.

Manchester United have handed Zlatan Ibrahimovic a new contract to stop him being poached by another club.

Demarai Gray wants Leicester to start him or sell him with Bournemouth offering nearly £30million for the starlet.

Arsene Wenger has told Jack Wilshere to prove he is worth a new contract after the Arsenal midfielder’s latest setback.

Didier Ndong has a £20million price on his head as Sunderland look to keep the star midfielder.

Harry Maguire has been tipped as a future England captain by his Leicester manager Craig Shakespeare.
THE GUARDIAN