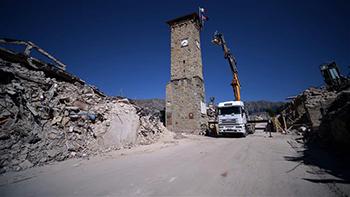 One year after a 6.0-magnitude earthquake struck the Amatrice region in central Italy, residents of many hilltop towns and villages that are still left in ruins remain frustrated by the sluggish pace of reconstruction.

It was well before dawn on August 24, 2016 when the devastating quake razed much of Amatrice and the surrounding region, killing families in their beds or trapping them in dust-filled cavities in the rubble. Nearly 300 people were killed in the quake.
There was more to come. Shell-shocked locals suffered three more violent quakes in late October last year and in mid-January, with the last one sparking an avalanche that would wipe out a resort hotel and kill 29 people.
On Thursday, a memorial was set up in the park in central Amatrice where people came one after another to pay their respects to their loved ones killed in the Amatrice earthquake a year ago.
Saletta was one of the many villages flattened by the quake.
“Twenty-one people died in our village, including my mom. I was able to escape from the window. But now all we have is still piles of rubble,” said Marco Sebastiani, a survivor of last year’s earthquake.
“It was such a long year. A lot has happened –four earthquakes and the biggest avalanche since 1956. The region has practically been turned into a war zone,” said Sergio Pirozzi, the mayor of Amatrice.
To this day, only 10 percent of the estimated two million tons of rubble in the damaged towns and villages has been cleaned up, while even the restoration of basic services such as power and water supplies remains indefinite.
Many locals blame burdensome administrative procedures for the snail-paced post-quake reconstruction.
The local authorities of Amatrice had planned to build 500 temporary houses to accommodate the affected residents, but so far, more than half of the houses remain unfinished.
(Source: AP)