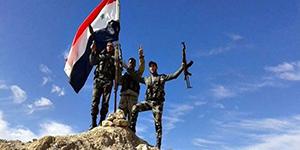 Provinces, SANA- Army units engaged in sporadic clashes with ISIS-affiliated terrorist groups over the past few hours in the surroundings of the Airport and the areas of al-Maqaber “cemeteries” and al-Panorama in Deir Ezzor, killing or injuring scores of terrorists , according to SANA reporter.
The reporter said that the Syrian Air Force and Artillery destroyed positions and fortifications for ISIS terrorists in Hwaijet Saker, Ein Bo Jouma’a and al-Ommal neighborhood, and in the villages of Ayyash , al-Khareta, al-Boughilieh.

In another context, civil sources in Deir Ezzor countryside noted that new ISIS-affiliated terrorist groups fled away with some of their leaders including terrorist Hussein al-Sawadi form the village of Tabiet Shamieh in the southeastern countryside.
The sources indicated that ISIS terrorist organization kidnapped 17 young men from Deir Ezzor city and some 200 others from al-Ashara and transported them to al-Mayadden city and forced them into the battles to cover the heavy losses inflicted upon the terrorists during the advancement of the Syrian Arab Army in several directions.
Damascus Countryside
Army units, in cooperation with Lebanese Resistance, continued operations for the sixth day to eradicate ISIS terrorist organization in the western part of Qalamoun area in Damascus Countryside.
SANA reporter said that the army units, in cooperation with the Lebanese Resistance, established control over the hills of Wadi al-Magharaa al-Kabeira, Wadi al-Magharaa al-Sagheira , the illegal crossing of Rass al-Shahout, which extends from the mountains of Qara town to the mountains of Lebanese Ersal town , inflicting heavy losses upon ISIS terrorists in personnel and arms and tightening the noose around the remaining terrorists on the southern axis in the western part of Qalamoun mountains.
Army units, in cooperation with Lebanese resistance, established control over the hills of Shabit Ismail, Dahrit Ali and Mashqata
crossing in Jorod Qara in Western Qalamoun in Damascus Countryside.
Hama
Units of army, in cooperation with backup forces, regained Jana al-Albawi town and the surrounding hills in Salamya in Hama eastern countryside.
Deir Ezzor
SANA reporter in Deir Ezzor said that a number of ISIS terrorists were killed during fierce clashes that erupted between terrorist groups of so-called al-Ansar and al-Muhajireen in al-Mayadeen in Deir Ezzor eastern countryside.