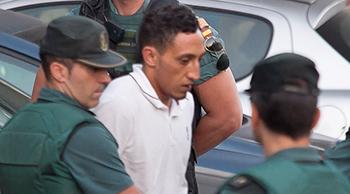 The 28-year-old suspect Driss Oukabir, who is being held in a Madrid jail in connection with the recent Catalonia attacks which killed 15 people, has been getting death threats from inmates, local media report.
“We are going to slit your throat when you go out to the patio,” prisoners of the Soto del Real jail in Madrid shouted through their windows when they heard of Oukabir’s arrival, security sources told El Pais.
“F**king terrorist!” others shouted.

Oukabir, who handed himself in to police in his home town of Ripoll, told a judge on Tuesday that he had rented the van that was used in the car ramming attack in Barcelona, which killed 13 people and injured some 130 on the popular Las Ramblas street on August 17. Oukabir maintains he thought the car would be used for furniture removal.
However, Judge Fernando Andreu ruled that there were “rational and well-founded indications” of Oukabir’s involvement in the attack, and he is being held without bail on charges of murder, membership of a terror organization and the possession of explosives.
Oukabir has been placed in solitary confinement for his own protection.
Police say eight of the twelve members of the terrorist cell initially sought are dead, including the driver of the vehicle used in the Barcelona attack – 22-year-old Moroccan Younes Abouyaaqoub, who was shot dead by police. However, it was later revealed that a larger attack with explosives had been planned. Apparently, two suspected terrorists died in an accidental blast while trying to manufacture the explosive in a house in Alcanar. Radical imam Albdelbaki Es Satty, who was one of the two conspirators killed in the blast, reportedly avoided deportation from Spain when a judge in 2015 ruled he posed “no real threat,” local media reported.
Using vehicles as weapons is an increasingly popular tactic used in terrorist attacks, which is hard to prevent and has led to extra vigilance as of late. On Wednesday, two men were taken in for questioning in the Dutch city of Rotterdam after gas canisters were found in a suspicious van parked outside a concert venue. The Dutch authorities were acting based on a tipoff from the Spanish police, but so far no available information suggests that the Rotterdam incident is linked to the attack in Barcelona. One of the detained men has been revealed to be a mechanic going out for a drink, and neither has been charged with terrorist offenses.