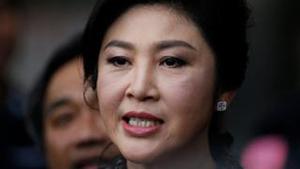 Former Thai PM Yingluck Shinawatra has failed to show up for the verdict in her trial over a controversial rice subsidy scheme.

Lawyers for Ms Yingluck, who is charged with negligence, said she was ill.
But the Supreme Court said it will issue an arrest warrant for her and has delayed the verdict to 27 September.
She has denied any wrongdoing in the scheme which cost billions of dollars. If found guilty, she faces jail and a lifetime ban from politics.
On Friday Ms Yingluck’s lawyers requested a delay in the ruling, telling the court that she had vertigo and was unable to attend.
But an official Supreme Court statement said prosecutors “do not believe the defendant is indeed ill as there is no medical certificate, and the condition that she claimed is not so severe that she cannot travel to the court”.
The court said it will issue the arrest warrant out of fear she may flee the country, according to AFP news agency. It also confiscated the $900,000 (£703,000) bail she posted at the start of the trial.
Ms Yingluck, who became Thailand’s first female prime minister in 2011, was impeached in 2015 over the rice scheme by a military-backed legislature, which also brought on the legal case.
But she remains popular. Hundreds of her supporters turned up outside the Supreme Court in Bangkok on Friday, amid a heavy police presence.
Ms Yingluck’s rice subsidy scheme, which was part of her election campaign platform, launched in 2011 shortly after she took office.
It was aimed at boosting farmers’ incomes and alleviating rural poverty, and saw the government paying farmers nearly twice the market rate for their crop.
But it hit Thailand’s rice exports hard, leading to a loss of at least $8bn (£6.25bn) and huge stockpiles of rice which the government could not sell.
Though popular with her rural voter base, opponents said the scheme was too expensive and open to corruption.
During her trial, Ms Yingluck had argued she was not responsible for the day-to-day running of the scheme. She has insisted she is a victim of political persecution.

Timeline of Yingluck’s rice scheme controversy
May 2011- Yingluck Shinawatra is elected PM, and shortly afterwards begins rolling out her rice subsidy scheme.
January 2014 – Thailand’s anti-corruption authorities investigate Ms Yingluck in connection to the scheme.
May 2014 – She is forced to step down from her post after Thailand’s constitutional court finds her guilty of abuse of power in another case. Weeks later the military ousts what remains of her government.
January 2015 – An army-backed legislature impeaches Ms Yingluck for corruption over her role in the rice scheme, which effectively bans her from politics for five years. It also launches legal proceedings against her.
August 2017 – Ms Yingluck fails to appear at court for the verdict, claiming ill health.

Ms Yingluck’s time in office was overshadowed by controversy as well as strong political opposition.
The youngest sister of tycoon and former prime minister Thaksin Shinawatra, Ms Yingluck was seen by her opponents as a proxy for her brother, who was controversially ousted by the military in 2006.
Both siblings remain popular among the rural poor, but are hated by an urban and middle-class elite.
Their Pheu Thai party has – under various different names – won every election in Thailand since 2001.