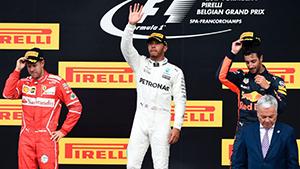 Lewis Hamilton celebrated his 200th Formula One race by reducing Sebastian Vettel’s lead at the summit of the championship following his victory at the Belgian Grand Prix.

Twenty-four hours after Hamilton equalled Michael Schumacher’s all-time pole position record, the Briton led virtually every lap here in the Ardennes to hold off a late challenge from Vettel, who crossed the line 2.3 seconds behind his title rival.

Hamilton’s victory at the Spa-Francorchamps circuit takes him to within seven points of Vettel ahead of next week’s Italian Grand Prix.

Daniel Ricciardo completed the podium for Red Bull, while Fernando Alonso’s miserable season took yet another miserable twist following his seventh retirement of the year.

The race nearly turned on its head on lap 29 when the Force India team-mates of Sergio Perez and Esteban Ocon collided for the second time in their last five outings. erez moved across to cover Ocon’s move on the run-up to Eau Rouge, and in doing so provoked a collision which saw him sustain a right-rear puncture, and his team-mate a damaged front wing.

“Guys, what the f***?,” an incandescent Ocon yelled over the radio. “Honestly. Idiot.”

As the Force India duo limped back to the pits, the safety car was deployed to clear the debris.

Hamilton, while being kept honest by Vettel, was in control of the race. But as the safety car was sent out he dived in for a new set of tyres. Vettel followed his rival in, with the former taking on the supposedly quicker ultrasoft compound. Hamilton took on the soft rubber, the more durable but slowest of the three tyres available this weekend.

A flustered Hamilton clearly sensed danger from Vettel, and queried why the safety car had been deployed.

“Why have they got the safety car out?,” he asked. “There is literally no debris anywhere. That’s a BS (bulls***) call from the stewards.”

Four laps later, the safety car peeled in, and Hamilton, as he did in Azerbaijan earlier this summer, began to bunch the pack.

On that occasion in Baku, Vettel hit Hamilton in the rear, and then drove alongside his rival before banging wheels. There was no such repeat here today, but Vettel knew passing Hamilton at the restart was his best chance of winning the race.

Vettel was within centimetres of Hamilton’s Mercedes as they sped up Eau Rouge and on to the Kemmel Straight at 200 miles per hour.

Vettel pulled to Hamilton’s left, but the British driver placed his car in the middle of the track and the Ferrari man was unable to find a way past at Les Combes.

It was an expert piece of defensive driving from Hamilto, which would – despite Vettel’s best efforts in the closing stages – enable him to win the race and claim his fifth win of the campaign.

Behind him, Ricciardo claimed the final spot on the podium after he passed Hamilton’s Mercedes team-mate Valtteri Bottas at the restart. Bottas fell off the road, and finished fifth, one spot behind Ferrari’s Kimi Raikkonen.

For Alonso, it marked yet another failure to reach the chequered flag. The Spaniard had been as high as seventh following a scintillating opening lap in which he moved up three places.

But his under-powered Honda engine was exploited lap after lap, and he began to fall down the order.

“Embarrassing,” the Spaniard, out of contract with McLaren at the end of the season, shouted on the team radio.

He then asked for radio silence before parking his car on lap 27 with an apparent engine problem. His retirement came moments after he had asked whether rain was forecast to hit the race. When Alonso was informed it was not, he called it a day.