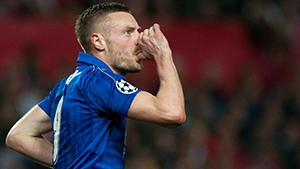 Everton and Chelsea are battling for Jamie Vardy, while is Chris Smalling on his way to Leicester? It’s all in Paper Talk!

Arsenal will sell Alex Oxlade-Chamberlain to Chelsea this week.

Manchester City’s hopes of signing Alexis Sanchez have been given an unlikely boost.

Chelsea and Liverpool look to be heading for a tribunal over the cost of Dominic Solanke.

Chelsea boss Antonio Conte will not sanction Kenedy’s loan move to Newcastle until he has signed another striker.

Borussia Dortmund’s Neven Subotic is eyeing a move to the Premier League with Liverpool, Chelsea, Leicester, West Brom and Stoke all interested.

Swansea will this week step up their efforts to re-sign striker Wilfried Bony from Manchester City.

Watford and Burnley are battling to bring Inter Milan defender Andrea Ranocchia back to the Premier League.

Norwich have told Alexander Tettey he can leave for a cut-price £1million.

Philippe Coutinho wants Liverpool to agree he can join Barcelona next summer if he stays at Anfield this season.

Chelsea manager Antonio Conte says the club’s youngsters are not ready to step up to the Premier League.

Kieran Trippier says he never doubted he could be a success at Tottenham.

Talk of Philippe Coutinho’s potential exit has been banned among the Liverpool squad.

Renato Sanchez was left out of Bayern Munich’s game against Werder Bremen with Liverpool and Chelsea interested.