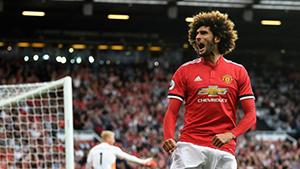 Review, reports and updated odds from Saturday’s action in the Premier League.

Manchester United moved back to the top of the Premier League table after claiming a third win from three games with Saturday’s 2-0 victory over Leicester.
Jose Mourinho’s men have now scored 10 league goals without reply this season, but things did not all go their way at Old Trafford.
Kasper Schmeichel saved Romelu Lukaku’s penalty six minutes into the second half and it took until 20 minutes from time for United to make the breakthrough.
Marcus Rashford took advantage of slack marking to sweep in following a corner three minutes after his introduction off the bench.
And Rashford’s fellow substitute Marouane Fellaini added a second after Jesse Lingard’s shot to leave Leicester, 2015-16 champions, with three points from their opening three matches.
The Foxes had their moments.
City claimed a late 2-1 win over Bournemouth as defeats for West Ham and Crystal Palace put pressure on Slaven Bilic and Frank De Boer at the bottom of the Premier League.
Palace and West Ham are without a point after three games.
De Boer’s Eagles are yet to score after a 2-0 defeat to previously winless Swansea and were booed off three matches into the Dutchman’s reign.
Tammy Abraham, on loan from Chelsea, scored his first Premier League goal one minute before half-time and Jordan Ayew added a second within three minutes of the restart.
Bilic’s Hammers lost 3-0 at Newcastle, who won for the first time this season through goals from Joselu, Ciaran Clark and substitute Aleksandar Mitrovic.
Bournemouth are also without a point after three games this season as Pep Guardiola’s City claimed victory through Raheem Sterling’s stoppage-time winner.
The England forward was sent off after earning a second yellow card for his celebrations at netting the decisive strike.
Gabriel Jesus had cancelled out Charlie Daniels’ stunning strike as City came from behind for a second win from three games following Monday’s draw with Everton, who play Chelsea on Sunday.
Huddersfield are also on seven points, alongside City, after being held to a goalless draw by Southampton.
The Terriers are still to concede a goal and lead Guardiola’s men on goal difference.
Saints are also unbeaten after a second draw.
Miguel Britos was sent off for a two-footed challenge on Anthony Knockaert after 24 minutes, but Brighton are still chasing a first Premier League goal this season.
They have their first point though and maiden clean sheet following a 0-0 draw at Watford.

Armenians at a crossroads on last route out of Karabakh