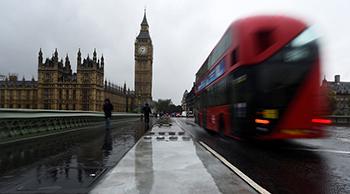 London Metropolitan Police could soon introduce extra security measures at the Palace of Westminster after a night-time terror attack simulation revealed serious flaws in the protection of the UK’s parliament building.
The mock terror attack, conducted last month while the country’s MPs were in recess, saw costumed police use a boat to cross the Thames and access the building via a terrace. They then worked their way through the corridors and into the Commons chamber. The operation took around five minutes to complete.
Police sources told the Sunday Telegraph that a similar real-life event would end with the slaughter of more than 100 MPs.

#BigBen will ring at noon, then fall silent until 2021 https://t.co/GvC9d9C6UXpic.twitter.com/G21bVPfuxg
— RT (@RT_com) August 21, 2017
A security review has suggested placing armed guards at the Thames entrances as well as installing a physical barrier in the river to stop boats coming near the building.
A spokeswoman for the Houses of Parliament said: “While we cannot comment on the specifics of our security, we work closely with the police, security services and others to ensure that our security measures are effective and meet whatever level of security risk Parliament faces.
“These measures are always, and will continue to be, under constant review.”
‘Barcelona attack not self-defense tactics; radicals want to annihilate the world’ – anti-terror expert to RThttps://t.co/goxQLLuS0ppic.twitter.com/Mi3P3HZzPv
— RT (@RT_com) August 18, 2017
There has been an increased focus on security around the Palace of Westminster in recent times.
In March, a major security review was carried out after a police officer was stabbed to death outside parliament. Terrorist suspect Khalid Masood, who had earlier driven a car into pedestrians on Westminster bridge, was shot dead by police.
Some 15,000 Parliamentary ID cards are also to be reissued to Westminster staff in the wake of an incident in February 2016 in which an intruder gained entry into parliament using a fake ID card. The man was then found drunk in the press gallery a day later.
The new ID cards will include a “distinctive hologram” as well as a name and photograph on both sides.