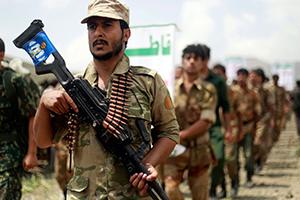 By Mohammed Hatem and Zainab Fattah

Infighting among Yemen rebels turned deadly for the first time since they joined forces in 2015, al-Masdar news website reported, further fraying their alliance against a Saudi-led attempt to wrest control of the country.

Clashes between Shiite Houthi fighters and forces loyal to toppled former President Ali Abdullah Saleh erupted late Saturday in the capital, Sana’a, the website reported, without giving details on the casualties. Al-Yemen al-Youm TV, affiliated with Saleh, said the dead included a military colonel loyal to the former president, and rebel-held Saba news agency reported that three people were killed.
“This is the most serious sign of a potential breakup that we’ve had so far,’’ said Graham Griffiths, an analyst at global risk consultancy Control Risks in Dubai. “It’s difficult to say whether they’ll be able to contain this outbreak of tension.’’
Escalating violence could drive Yemen, already devastated by widespread carnage and in the throes of a humanitarian disaster, to become an even more menacing entity perched south of the world’s biggest oil exporter and a major maritime artery.
Frictions in the rebel camp recently broke out into the open, with the Houthis accusing Saleh of holding secret talks with the United Arab Emirates, a close Saudi ally and member of the coalition. Saleh denies the charges and on Thursday, thousands of supporters gathered in Sana’a to express support for the still-powerful Saleh, who fought the Houthis multiple times while president.
The conflict dividing Yemen — seen as a proxy war between Saudi Arabia and arch-rival Iran — has the ousted Saudi-backed elected president, Abdurabu Mansur Hadi, encamped in Riyadh and the Iran-backed Houthis, assisted by Saleh’s forces, controlling Sana’a and parts of the north. The Saudi-led coalition that formed in 2015 to try to reinstate Hadi has devastated swaths of the country with airstrikes, and al-Qaeda militants have exploited the chaos to expand their foothold in the Arabian Peninsula.
“A decisive and crushing military victory for the coalition and Abdurabu Hadi is unlikely even if the alliance broke down,” Griffiths said. “It’s more likely that a period of chaos and fragmentation would ensue with no clear victor. ”