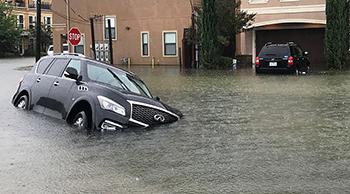 A flash flood emergency has been declared in the Houston area of Texas by the National Weather Service after water reached the second floors of houses south of the city. The heavy rains were brought about by hurricane Harvey, now downgraded to a tropical storm.
Reports of water reaching the second storeys of houses and apartment complexes came not only from southern Huston, but also from Dickinson in nearby Galveston County.

People are going to wake up to major flooding #SundayMorning. pic.twitter.com/DL22cTodbN
— Red T Raccoon (@RedTRaccoon) August 27, 2017
According to unconfirmed data from the National Weather Service, five people have been so far killed by the storm.
The CCN reported two fatalities, with a woman drowning after driving her car in high water in Houston and another person dying in a storm-related fire in Rockport.
The actual death toll remains unclear as the rescuers are simply unable to reach all those stranded by the disaster in their homes or cars.
White Oak Bayou near my apartment #HurricaneHarvery#houstonflooding#Houstonpic.twitter.com/jYQNsuhkxi
— Seanathan (@thatseanmichael) August 27, 2017
The extent of the damage from Harvey is hard to assess at the moment, but Federal Emergency Management Agency administrator, William Brock Long, told NBC’s “Meet the Press” that the length of the recovery process is “going to be years.”
Hurricane Harvey, a Category 4 storm, hit the Gulf coast of Texas at around 10:00 local time on Saturday with powerful winds and heavy rainfall.
View from Rosemont Pedestrian Bridge @ 9 am. Yes, this is normally a major road. #MemorialDrive#Houston#[email protected]/TOWZSsMc4P
— Maggie Gordon (@MagEGordon) 27 августа 2017 г.
It reached Houston early on Sunday, dumping 20 to 30 inches (50 to 70 cm) of rain on the already saturated city.
US President Donald Trump announced that he intends to visit the affected Houston area next week.